Avoid Big Problems By Paying Attention to the Small Stuff

Almost every manager has been told not to micro-manage their direct reports. So the advice above:

Avoid Big Problems By Paying Attention to the Small Stuff Perhaps this quote from Admiral Rickover, leader of the most successful organization to implement process safety and organizational excellence, might make the concept clearer:

The Devil is in the details, but so is salvation.

When you talk to senior managers who existed through a major accident (the type that gets bad national press and results in a management shakeup), they never saw it coming.

A Senior VP at a utility told me:

It was like I was walking along on a bright sunny day and
the next thing I knew, I was at the bottom of a deep dark hole.

I have never seen a major accident that wasn’t preceded by precursor incidents.

What is a precursor incident?

These type of incidents happen more often than people like to admit. Thus, they give management the opportunity to learn.

What is the response by most managers? Do they learn? NO. Why? Because the consequences of the little incidents are insignificant. Why waste valuable time, money, and resources investigating small consequence incidents. As one Plant Manager said:

If we investigated  every incident, we would do nothing but investigate incidents.

Therefore, a quick and dirty root cause analysis is performed (think 5-Whys) and some easy corrective actions that really don’t change things that are implemented.

The result? It looks like the problem goes away. Why? Because big accidents usually have multiple Safeguards and they seldom fail all at once. It’s sort of like James Reason’s Swiss Cheese Model… 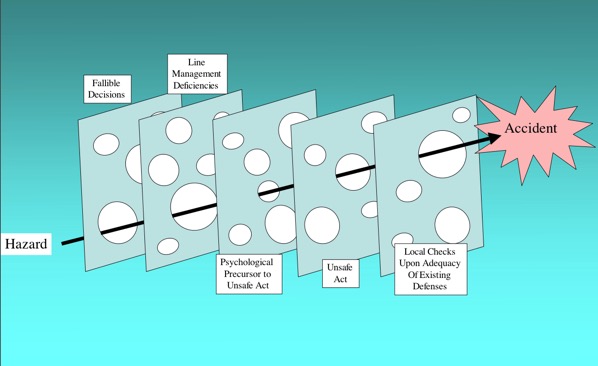 The holes move around and change size, but they don’t line up all the time. So, if you are lucky, you won’t be there when the accident happens. So, maybe the small incidents repeat but a big accident hasn’t happened (yet).

The organization and members thereof must have the ability
and willingness to learn from mistakes of the past.

And the mistakes he referred to were both major accidents (which didn’t occur in the Nuclear Navy when it came to reactor safety) and precursor incidents.

Are you ready to learn from precursor incidents to avoid major accidents? Then stop trying to take shortcuts to save time and effort when investigating minor incidents (low actual consequences) that could have been worse. Start applying advanced root cause analysis to precursor incidents.

The first thing you will learn is that identifying the correct answer once is a whole lot easier that finding the wrong answer many times.

The second thing you will learn is that when people start finding the real root causes of problems and do real root cause analysis frequently, they get much better at problem solving and performance improves quickly. The effort required is less than doing many poor investigations.

Overall you will learn that the process pay for itself when advanced root cause analysis is applied consistently. Why? Because the “little stuff” that isn’t being fixed is much more costly than you think.

How do you get started?

The fastest way is by sending some folks to the 2-Day TapRooT® Root Cause Analysis Course to learn to investigate precursor incidents. The 2-Day Course is a great start. But some of your best problem solvers need to learn more. They need the skills necessary to coach others and to investigate significant incidents and major accidents. They need to attend the 5-Day TapRooT® Advanced Root Cause Analysis Team Leader Training.

Once you have the process started, you can develop a plan to continually improve your improvement efforts. You organization will become willing to learn. You will prove how valuable these tools are and be willing to become best in class.

Rome wasn’t built in a day but you have to get started to see the progress you need to achieve. Start now and build on success.

Would you like to talk to one of our TapRooT® Experts to get even more ideas for improving your root cause analysis? Contact us by CLICKING HERE.