The Associate Press reported that attorneys for Don Blankenship, the imprisoned former CEO of Massey Energy, should not have been sentenced to go to jail for the 2010 coal mine explosion that killed 29 people.

Note that I found this “wanted poster” on line at http://mountainkeeper.blogspot.com. 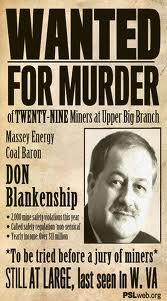