Definition of a Root Cause

One might take it for granted that everyone can define the term “root cause.” So, what is the definition of a root cause?

The online Collins Dictionary defines a root cause as:

“The fundamental reason for the occurance of a problem.”

The dictionary says that the first recorded usage of “root cause” was sometime in the late 1800s and that the term “root cause” is one of the 30,000 most used words in the Collins Dictionary.

Therefore, a basic problem faced by people performing root cause analysis is that…

People don’t even agree on the definition of what is a “root cause.”

An Early Definition of a Root Cause…

David Busch and I weren’t the first to define a “root cause.” We started developing our definition in 1985. Our first definition is shown below…

The most basic cause (or causes)
that can reasonably be identified
that management has control to fix.

From this definition, many other recent definitions were developed (you might say it became an industry standard).

We found four main parts were important in this definition…

First, when one finds a root cause, one has found something that will fix the problem. This is the key because it keeps one looking for a fixable solution.

Third, our definition helps answer the always troubling question of how much investigative effort is enough. This question comes down to a trade-off between a “reasonable” effort (usually defined as the least possible effort) and finding the “most basic” cause(s) (sometimes seen as a never-ending quest if people can’t agree on the definition of a “basic cause”). The final arbitrator between these two competing priorities (timeliness and completeness) is the requirement to find fixable causes that, when corrected, will prevent the incident’s recurrence. Therefore, an investigator has expended a “reasonable” effort if one has identified the fixable causes of an incident.

Fourth, the definition implies that a problem may have more than one root cause. In our early experience investigating and reviewing hundreds of incidents, we found that, on average, simple incidents (a simple incident is one with one or two Causal Factors) had on average 3.6 root causes per incident. In our experience with more complex incidents in more complex systems (with multiple Safeguards and multiple Causal Factors in the incident), we often found ten or more root causes (things that can be improved) in a single, complex incident.

Allowing for multiple root causes stops arguments over which cause is the “rootiest” of the root causes. Any cause for a problem that fits the definition is one of the problem’s root causes.

Our definition was the jumping-off point in the search for a tool that will help a problem solver find fixable root causes. This definition of a root cause became the bedrock upon which the TapRooT® System was built.

The most basic cause (or causes)
that can reasonably be identified
that management has control to fix
and, when fixed, will prevent
(or significantly reduce the likelihood of)
the problem’s recurrence.

As the TapRooT® System started its testing and development in the early 1990s, Mark Paradies and Linda Unger added to the old definition with the concept of preventing recurrence or reducing the likelihood of recurrence. This wasn’t a major change, but it slightly improved the definition while making it wordier. And it included in the definition causes that made the problem more likely.

By 2005, Linda Unger and Mark Paradies realized that the definition they had developed for a root cause made an incident investigation look negative. People using the definition were looking for causes of problems. People would argue about “management’s ability to fix a problem.” They would say …

We weren’t trying to place blame. We meant that the problem was fixable if management committed the needed resources.

We decided we needed a better definition that was focused on improvement because we didn’t want our definition used to place blame. 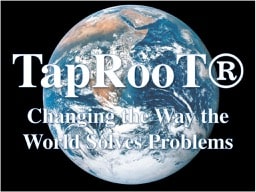 Therefore, in 2006, we published this new definition of a root cause…

The absence of a best practice
or the failure to apply knowledge
that would have prevented the problem.

The new definition focuses more on the positive. We found it to be a major step forward. Now, people analyzing root causes are searching for best practices and knowledge to prevent problems. They aren’t looking for people to blame or management failures. They are finding ways to perform work more reliably. This is a FOCUS ON IMPROVEMENT.

One more note … The new definition is rather absolute.

The words “would have prevented” should probably include the phrase “or significantly reduced the likelihood of” because, in real life, it is probably impossible to guarantee that a problem will be prevented from EVER happening again. But we haven’t modified the definition because we wanted the emphasis to remain as definite as possible even though we realize that a 100% guarantee probably is NOT possible.

All the definitions above are helpful in the search for root causes, but they are not sufficient. So we had to do more than just develop a definition. We had to develop a system to find root causes.

Our first definition started the development of advanced root cause analysis. This eventually led to the TapRooT® System and the “secret sauce” of that system, the Root Cause Tree® Diagram. 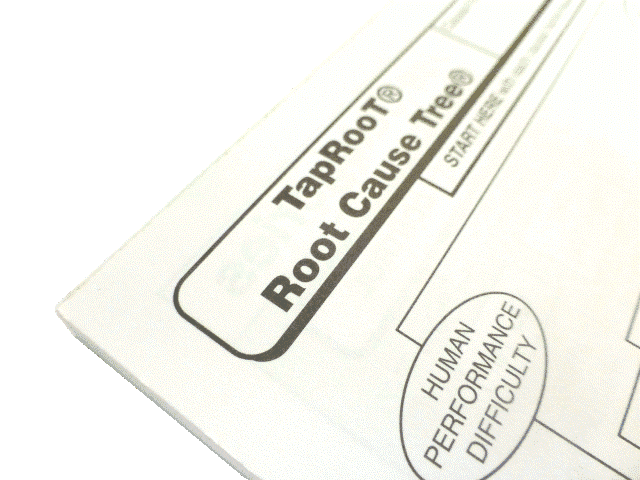 The Root Cause Tree® Diagram gives an investigator an operational definition of “What is a root cause?” and guides the root cause analysis.

Thus, the definition becomes less important when you have a system that can guide you to consistently meet the goals of the definition – stopping problems from recurring by implementing successful corrective actions.

For more about the development history of TapRooT® Root Cause Analysis, see: 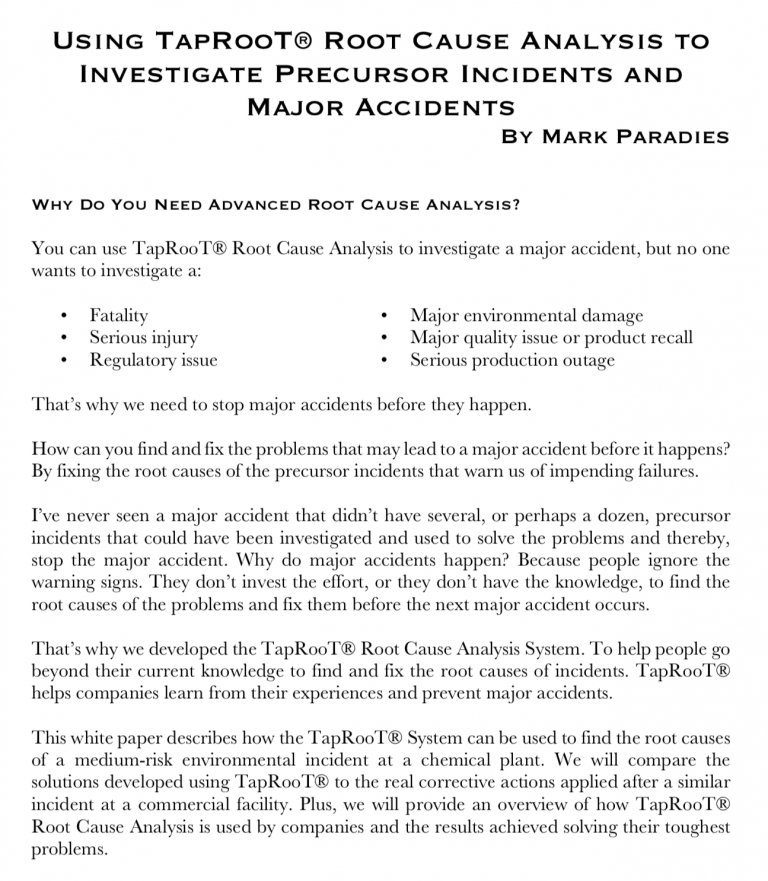 To learn even more about TapRooT® System and the Root Cause Tree® Diagram, read the TapRooT® Books or attend our advanced TapRooT® Root Cause Analysis Training. 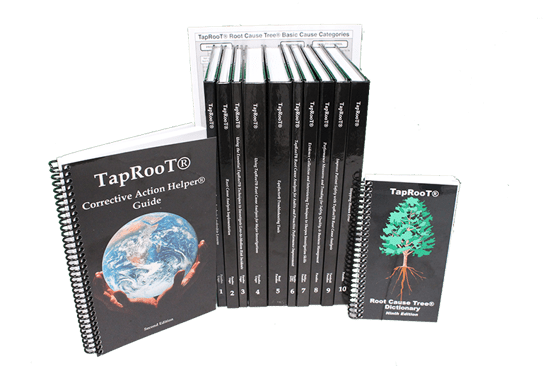 For a quick TV discussion about TapRooT® Root Cause Analysis (Mark Paradies and Kathy Ireland), watch this video…

Finally, for a quick read on the fundamentals of advanced root cause analysis, see:

Need More Info? Give Us a Call!

3 Replies to “Definition of a Root Cause”