The helicopter flight was en route to pick up a patient.

The helicopter, a single-engine, turbine-powered, Bell 407, was flying in Ohio’s rural Vinton County, from Mt. Carmel Grove City Hospital to Holzer Meigs Hospital in Pomeroy, on January 29, 2019. The flight was to be approximately 69 miles southeast.

The Ohio State Highway Patrol was notified by Survival Flight that communication was lost with the helicopter just before the aircraft collided with forested, rising terrain about 4 miles northeast of Zaleski, Ohio.

The helicopter was registered to and operated by Viking Aviation, LLC, doing business as Survival Flight, Inc., as a visual flight rules helicopter air ambulance flight under the provisions of 14 Code of Federal Regulations Part 135 when the accident occurred. The certificated commercial pilot, flight nurse, and flight paramedic were fatally injured, and the helicopter was destroyed. 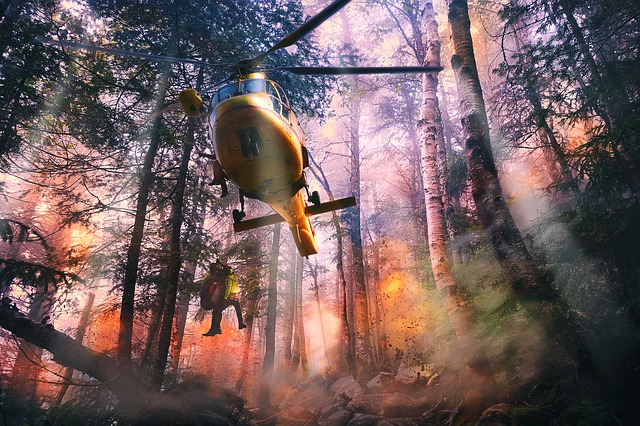 The helicopter crash, at first glance

According to the Survival Flight Operations Control Specialist (OCS) on duty at the time of the accident, the night shift pilot had originally accepted the flight. The OCS said that, while he was on the phone with that pilot reviewing flight details about 0612, he was told that, due to the upcoming shift change, the day pilot would be taking the flight.

The OCS said that, while watching the helicopter on flight-tracking software in the Operations Control Center, he observed that, about 15 minutes after departure, the helicopter made a turn to the right, then “a sharp left turn,” which was immediately followed by a “no-tracking alarm.” The emergency action plan was then initiated.

The helicopter wreckage was located on a tree-covered hill and exhibited significant fragmentation. The wreckage and debris path extended about 600 feet downslope on a heading of about 345° magnetic. A portion of the front-left skid tube was found at the start of the wreckage path, followed by the main rotor hub and blades, tail boom and tail rotor, cockpit and cabin, and the engine and transmission deck. Tree branches broken about 30 feet above ground level were observed near the front-left skid tube. Additionally, one main rotor blade had separated from the main rotor hub and was embedded in a tree. The elevation of the wreckage area ranged from 850 to 980 ft above mean sea level (msl). There was no evidence of a post-crash fire, but a strong smell of fuel was reported by first responders when the wreckage was first discovered.

The helicopter was equipped with an Outerlink Global Solutions IRIS flight data monitoring system, which provides real-time flight tracking data. The flight-tracking information is relayed via satellites to an internet-based storage location in 10-second intervals. According to the IRIS data, the helicopter’s last known location was about 4 miles northeast of Zaleski at an altitude of 1,528 ft msl, traveling at 132 knots across the ground, on a course of 072°. In addition to the transmission of data at 10-second intervals, the IRIS stores flight data in 1-second intervals, along with voice and satellite communications. The equipment was removed and sent to the NTSB Vehicle Recorders Laboratory for voice and data extraction

Visual meteorological conditions existed at the departure location, and company flight following procedures were in effect.

According to the NTSB (National Transportation Safety Board) preliminary report, employees were, “using the website wetherturndown.com to obtain flight requests…that other operators had turned down due to weather. Several interviewees referred to this as “reverse helicopter shopping.”

The NTSB report highlighted that while Survival Flight staff did not see a concern about the weather at the time of the flight, weather reports in the area reported this: “The NWS office in Charleston, West Virginia, issued the following winter weather advisory at 0504 EST. The winter weather advisory warned of rapidly falling temperatures, flash freeze conditions, scattered snow showers, and up to an inch of snow accumulation possible through 1300 EST on January 31.”

The report continued, “There is no record of the accident pilot receiving or retrieving any other weather information before or during the accident flight.”

Other helicopter companies had already declined to fly that day

On the day of the crash both MedFlight and HealthNet, two competing medical helicopter companies, turned down the flight due to weather conditions.