Helicopter Catches Fire After Touching Down in Wycombe Air Park

A helicopter flew from Dunkeswell, Devon, UK, to Wycombe Air Park, Buckinghamshire, on July 22, 2019 at 5:30 pm. As the pilot shut down the helicopter, he noticed smoke emanating from the left side of the rotor mast. He evacuated the helicopter and tried, unsuccessfully, to extinguish the fire with the helicopter’s on-board fire extinguisher. The helicopter was destroyed. 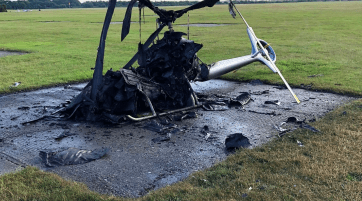 Examination of the wreckage identified that the electrical cable connecting the alternator to the starter relay had short circuited against the aluminum baffle that surrounds the engine, probably as a result of the cable clips being incorrectly fitted.

As a result of this investigation the helicopter manufacturer issued a service bulletin to instruct operators to inspect for correct installation of the cable clips and has also completed a redesign of the clips to ensure they cannot be fitted incorrectly.

A deeper dive into the details

Prior to landing, the pilot made a blind radio call on the Wycombe frequency before the helicopter entered the ATZ to the north of the airfield. After crossing Runway 06/24, the helicopter landed on helicopter pad 10. After landing, the pilot commenced the normal shutdown procedure. He brought the engine to idle, disengaged the clutch, waited 10 seconds, and then shut down the engine. As he did so, he noticed a static noise being received on the radio. He also noticed that the ammeter was at its full negative deflection for approximately 2 seconds before stabilizing at around 1/3 negative deflection. In addition the Exhaust Gas Temperature (EGT), which would normally read ‘- – -’2 shortly after shutdown, indicated approximately 350°C and the carburetor temperature reading was steadily increasing from 30°C to above 50°C.*

The pilot applied the rotor brake and shortly before the rotor had stopped, he observed smoke rising over the left side of the helicopter. He left the helicopter and saw flames coming from within the cowling around the left side of the main rotor mast. He went back to the helicopter and pulled the emergency fuel shut-off and switched off all electrical switches before retrieving the on-board fire extinguisher. He expended its contents, half into the mast cowling and half onto the underside of the engine, but this had no effect. He then retrieved a personal bag from the cockpit before retreating to a safe distance. A witness called the emergency services and a local fire and rescue appliance.

A review of the recorded information

A closed-circuit television camera captured the landing and subsequent fire. The first noticeable smoke coming from the rotor mast was observed approximately 244 seconds after the aircraft landed. At this time, the rotor blades were slowing and the tail-mounted strobe light was flashing, indicating that the master switch was on. 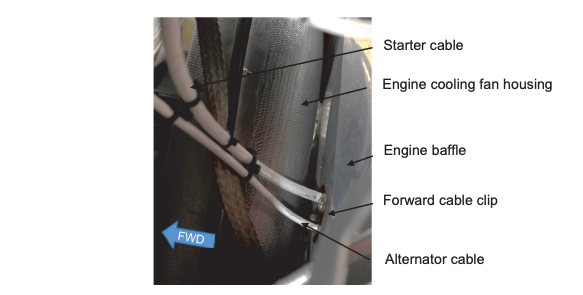 What did the investigation find?

The helicopter caught fire shortly after landing because the heat generated from a short circuit in the engine compartment ignited a nearby carbon fibre structure. The short circuit was made between the cable that connected the output of the alternator to the starter relay and the aluminum air baffle through which the cable passed.

It is likely that the cable clips that should have held the cable as it passed though the baffle were either not present or, most likely, incorrectly fitted. The upward movement of the engine as a result of the clutch disengagement was sufficient to allow the unsecured cable to contact the unprepared edge of the aluminum baffle, allowing the insulation to be cut and initiate the short circuit.

Air Accidents Investigation Branch: AAIB Bulletin: G-CILR EW/C2019/07/04GOV.​UK. Report published: 19 March 2020. The Air Accidents Investigation Branch investigates civil aircraft accidents and serious incidents within the UK, its overseas territories, and crown dependencies. The AAIB is a branch of the Department for Transport and is based in the grounds of Farnborough Airport, England. Crown copyright.

Safety is a must

TapRooT® Root Cause Analysis supports mission-critical business functions. Leading aerospace and defense companies around the world use TapRooT® to find and fix the causes of problems in mission-critical systems. When your corporate reputation is at risk and lives are on the line, you can’t afford anything but a proven, highly reliable root cause analysis system and software, TapRooT®.

Register for a TapRooT® Root Cause Analysis Training Course