How far away is death: Chasing a storm 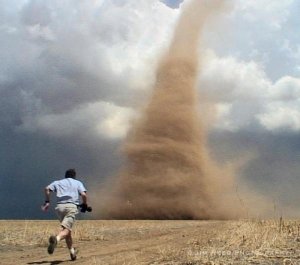 Blizzards, tornadoes, hurricanes. “How far away is death?” can race through your mind in a dangerous situation. Not many folks run toward a storm, much less a funnel cloud. But that’s what Jim Reed, extreme weather photographer, does. In Colby, Kansas, in May 2008, Reed hunted down and took a shot of a “landspout tornado” that’s still talked about today.

Reed described it as “one of the most spectacular sights” he’s ever seen and opted to get even closer to the storm with his assistant, Robin.

“‘At 2:42, we jumped out, cameras firing. We were so close we could hear the tornado, which sounded like a rushing waterfall. Dust fell all around us,'” wrote Reed.

“The duo was snapping away when the twister began barreling toward them, forcing them to make a mad dash back to their vehicle.

“As soon as our doors were closed I reversed and slammed on the gas. To escape the tornado, I had to drive very fast backward, keeping us in the road’s grooves,” Reed wrote. “As I steered looking through the rear window, Robin described what she was seeing. ‘It’s getting closer and it’s growing—it’s coming towards us.’ The tornado was now chasing us down the road.”

Reed suspected the twister was losing steam and opted to stop the car and hop back out with the storm just 500 feet away. In a daring move, Reed ran toward the storm and captured the images that would go on to be iconic.

“Flying dust stopped me about 150 feet from the landspout. I fired off a few frames, but what I really wanted to do was stand there and take in the extraordinary interaction with nature,” he wrote.

“As the landspout dissolved, I slowly walked backwards toward the vehicle. I just didn’t feel it was respectful to turn my back on the vortex,” Reed continued. “Seconds later, the vortex collapsed, sending a tidal wave of dust over me. We were covered in it, but both cameras kept working perfectly.”

Get a sense of Reed’s journey as an extreme weather photographer in the video below:

TapRooT® has a team of investigators and instructors with years of extensive training ready to offer assistance worldwide. We also offer ongoing support to our clients through Free Newsletters and Root Cause Tip Videos, the Root Cause Analysis Blog, and our annual Global TapRooT® Summit.

Register for one of our courses. We offer a basic 2-Day course and an advanced 5-Day course. Contact us or call us at 865.539.2139 about having a course at your site or for further root cause analysis training opportunities. We’re here to find solutions for you.