This success story was written in the past and is being updated to our most recent blog article format and is being reposted here. The example shows how TapRooT® Root Cause Analysis (RCA) can be successfully used to quickly but effectively investigate an expensive process incident and prevent the incident’s recurrence. The lessons learned from this success story still apply today.

To quickly (within two weeks while repairs are being made) and without requiring excessive support of plant personnel, investigate and learn how to prevent the recurrence of the collapse of a process tank that caused severe damage to the tank and significant costs for its replacement. 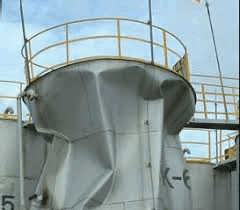 During the T&I period for a large petrochemical manufacturing process, a large tank collapsed due to the rapid condensation of steam that was being used to steam out the tank for maintenance work.
The rapid condensation occurred when the deluge system was accidentally activated when an electrician removed a faulty bulb in one of the relays for the deluge system’s electrical power supply.

A TapRooT® Trained Facilitator was chosen to lead the investigation. He had been to the 5-Day TapRooT® Advanced Root Cause Analysis Team Leader Course. He decided to use lunch hour (lunch was being catered) to conduct meetings with plant personnel participating in the investigations to save their time and avoid interruptions to the turnaround. It took four sessions one to three days apart (a total of 9 hours) to complete the investigation and develop corrective actions that will help prevent this type of incident from recurring.

In the first session, the team members learned about TapRooT® and drew their first SnapCharT® Diagram to better understand what happened.

In the second session, the team reviewed the SnapCharT® and the Causal Factors for the incident.

In the third session, the team reviewed a root cause analysis that had been performed by the facilitator using the Root Cause Tree® Diagram. All team members agreed to the analysis.

In this short period of time, interesting problems were uncovered and difficult issues were addressed. TapRooT® RCA helped us logically and quickly lay out what happened and understand the specific root causes.

The two most impressive items about this investigation were:

We believe that this new checklist will fill an important gap in our maintenance planning process. After reviewing our past experience, we estimated that the insight from lessons learned from this one incident could save Huntsman over a million dollars a year by eliminating the sometimes expensive and dangerous unplanned events that happen during maintenance.

Improving performance is never really completed. This is just one example that demonstrates how we will continue to use the TapRooT® System to improve safety, production, and maintenance. But I think it clearly demonstrates that all investigations don’t have to be long, drawn-out affairs to learn lessons of great value.