At approximately 6,000 feet, Regional Express flight ZL768 made an emergency call to report a propeller had fallen off on the aircraft’s approach about 12 miles southwest of Sydney Airport. The Albury to Sydney regional plane was carrying 16 passengers and three crew members on Friday afternoon, March 17, 2017. The propeller was clearly missing from the SAAB 340B aircraft in photographs of the plane on the ground. 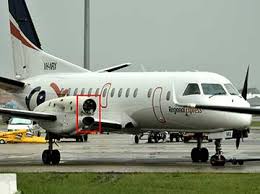 Civil Aviation Safety Authority (CASA) spokesman, Peter Gibson, urged Sydney residents to help the authorities search for the propeller: “It’s important because the Australian Transport Safety Bureau will need to look at the damage to that to get a full understanding of what happened. If anybody finds it, they should contact the police in the first instance.” Gibson called the incident “very, very unusual,” with the bureau launching three investigations into its cause, and both the Australian Transport Safety Bureau (ATSB) and CASA investigating whether this would prove a defect in all SAAB 340B aircraft or a singular incident.

Air traffic control logs tell us that, upon realizing the plane had lost the propeller, its pilot put through a PAN call, signifying urgency rather than a mayday:

Controllers then moved to delay other flights.

The New South Wales Police Aviation Support Branch undertook a search operation for the propeller. The propeller was found in dense bushland at Revesby and airlifted out.

The ATSB found the fracture was due to a fatigue crack that originated in a propeller shaft flange dowel hole and spread through the shaft until it could no longer transmit the loads required to maintain the propeller on the aircraft.

Following the incident, the engine manufacturer, General Electric, and the airline, undertook a number of proactive safety actions.

“The airline and the engine’s manufacturer have undertaken a number of proactive safety actions, such as the release of new service bulletins and airworthiness directives, and changes to their maintenance regime, to reduce the risk of this extremely rare event from occurring again,” Mr Hood said.

On October 10, 2018, he ATSB released the final investigation report of the March 17, 2017, in-flight loss of propeller involving Saab 340B, VH-NRX, occurring near the Sydney airport.

Report SummarY
The ATSB found the propeller separated from the aircraft due to a fracture of the propeller shaft on the right engine propeller gearbox (PGB). This was the result of a fatigue crack that originated in the PGB shaft flange dowel hole.

The ATSB found the crew demonstrated a high level of professionalism in their communication, coordination, and application of the safety checklist procedures in their response to the incident.

To ensure targeted inspections of the PGB flange and shaft is part of ongoing maintenance, the airline and the engine manufacturer have undertaken a number of proactive safety actions such as the release of new service bulletins and airworthiness directives.

The engine manufacturer did not have specific inspection procedures in the maintenance documents of the propeller shaft to detect a fatigue crack originating from the dowel pin hole.