Emiliano Raúl Sala Taffarel, the Premier League Argentine professional striker, was newly traded from Nantes, France, to Cardiff, Wales. The 28-year-old Sala was en route to Cardiff when the Piper Malibu N264DB carrying him and pilot David Ibbotson, age 59, disappeared over the English Channel on January 21, 2019, having taken off from Nantes at approximately 7:15 p.m. The plane made a request to descend during the flight, then contact was lost between the aircraft and Jersey air traffic control (see BBC map below). 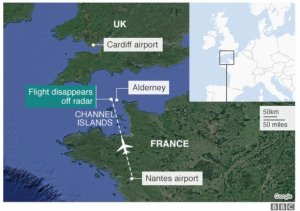 During the early going after the aircraft went missing, there was pressure brought to bear on authorities to continue looking for the plane. According to The Guardian, the official search operation was “called off January 24 when Guernsey’s harbor master, Captain David Barker, said the chances of survival following such a long period were ‘extremely remote.’ The termination of the search caused an outcry, with supporters of the family–and footballers including Sala’s compatriot Lionel Messi–calling for the search to be resumed. The Argentinian embassy in London also tried to put pressure on the UK government to do more. On Wednesday, the AAIB confirmed it had commissioned a Ministry of Defense salvage and marine operations team to try to locate the plane. It insisted that as soon as it was informed of the crash, it had been looking at the possibility of a seabed search.”

Two investigations set out to find the missing aircraft and the two men aboard; each investigation employed vessels using sonar to search four square miles approximately 24 nautical miles north of Guernsey. The area under investigation was chosen based on the flight path prior to losing radar contact with the plane. The UK Air Accidents Investigation Branch (AAIB) was conducting a three-day search with its Geo Ocean III vessel. A privately funded second vessel stated it would search “until the plane is located,” according to independent search leader and shipwreck specialist David Mearns. 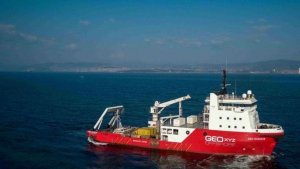 The wreckage was found Sunday morning, February 3, 2019, in the sea off the Channel Islands. The FPV Morven, the search boat that located the aircraft, was privately hired by Sala’s Argentinian family. The crew relayed the location to the AAIB who employed a remotely operated underwater vehicle (ROV), the Geo Ocean III, to investigate the wreck. Mearns made a statement on behalf of the investigation thus far and you can see the video of his statement here.

Update from February 4, 2019
In a statement today, the AAIB revealed that investigators inspecting the wreckage of Emiliano Sala’s plane have confirmed one occupant has been found inside the aircraft. The discovery was made using an underwater camera.

In its statement, the AAIB said, “Tragically, in video footage from the ROV, one occupant is visible amidst the wreckage.” The AAIB is currently considering the investigation’s next steps, while consulting with police and the families of the pilot and passenger.