Full of cold, tired, uncomfortable passengers, a Southeastern evening train was stalled on icy tracks in south London near Lewisham station on March 2, 2018. Passengers had been stranded aboard the packed train, standing up for more than three hours without heat, lights, or restroom facilities. Finally fed up, a passenger pressed the emergency button, forced the doors open, and jumped off the train through the emergency exit. 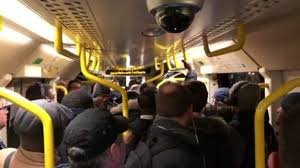 A “mutiny” grew, as crowds of passengers decided to detrain in the same manner. As a flood of passengers—some who had been stranded for more than five hours—escaped from more and more trains along frozen tracks, they unwittingly risked electrocution by walking along rails that carried 750 volts of electricity, as well as running the risk of being hit by other trains.

The Response & repercussions
The detraining of passengers triggered the police. British Transport Police, the Met Police, and the London Fire Brigade were soon attending the scene. 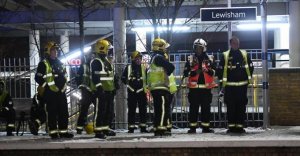 Network Rail and Southeastern turned off the power, causing a domino effect of delays for a significant number of trains. In turn, the stoppage of trains caused more passengers to exit onto the tracks.

A spokesman for Network Rail declared that it was “incredibly irresponsible and dangerous” for passengers to trespass on the tracks.

A Southeastern spokesman made a statement: “We completely understand that passengers on delayed and busy trains may be frustrated, but they simply must stay on the train for their own safety. These trespassers risk being electrocuted by the ‘third’ rail or hit by other trains. They’re also causing significant further delay for other passengers that our staff are working hard to get home.”

Through a tweet, the British Transport Police conveyed that all available officers were deployed to help evacuate passengers stranded on trains.

A joint message from ourselves and the rail industry…please, please do not self-evacuate from trains. pic.twitter.com/OIEZTH51qv

Communication through tweets became the conduit of both information and frustration.

We were hand clearing conductor rail to rescue 2 trapped trains at #Lewisham when our manager found people on the track.

He had to turn the power off to stop the trespassers from being killed and now more trains are late. Please, stay on your trains. #Lewisham

Mick Cash, leader of the Rail, Maritime, and Transport Union, stated that the incident “raised some serious issues about the capacity of Britain’s railways to cope with added pressures from adverse weather,” calling for “a full and transparent investigation” into the rail service issues from the incident. 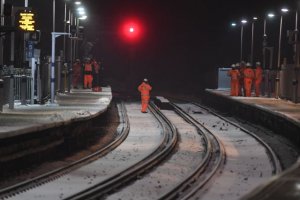 The Rail Accident Investigation Branch Report
The incident report from Rail Accident Investigation Branch (RAIB) states that “The uncontrolled nature of the detrainments delayed traction power reinstatement and resulted in trains being stranded for around four-and-a-half hours. Emergency services attended and helped with incident management and recovery. Although no one was seriously injured, conditions on all of the stranded trains became very difficult for passengers and staff.”

The RAIB report is clear that its investigative focus was on “safety learning relating to the initial unsafe passenger detrainments. While incident and recovery management actions are broadly described, they were not the subject of detailed examination by the RAIB.”

RAIB sets out in the report that “The initial detrainment occurred because of the time the train had been held at the signal. Passengers were getting increasingly uncomfortable in crowded carriages with no toilet facilities. Ultimately the motivation of passengers to leave the train outweighed the effectiveness of encouragements to stay on board.

The accumulation of ice on the conductor rail, which prevented train 2M48 from drawing power, is a known problem that the railway industry seeks to mitigate with a range of measures. In this instance, weather forecasts had warned Network Rail and Southeastern that there was a high risk of ice forming on the conductor rail and they had implemented arrangements to manage this. These arrangements proved ineffective for the following reasons:

Circumstances can crop up anywhere at any time if proper and safe sequence and procedures are not planned and followed. We encourage you to learn and use the TAPROOT® SYSTEM to find and fix problems.

Register for one of our COURSES. We offer a basic 2-DAY COURSE and an advanced 5-DAY COURSE. CONTACT US or call 865.539.2139 about having a course at your site or for further root cause analysis opportunities. We’re here to find solutions for you.