A late Thursday afternoon in 2018 saw thousands evacuate their homes while firefighters scrambled to respond to ten alarms and 18 fires raging simultaneously in the Merrimack Valley region of Massachusetts. Gas was quickly turned off to 8,000 homes, while more than 15,000 people in the Merrimack Valley were without power shortly after the explosions.

By Thursday night, the National Transportation Safety Board (NTSB) announced that it would be sending a “Go-Team” to Lawrence, Massachusetts. (The purpose of the “Go-Team” is to begin investigating a major accident at the scene as quickly as possible.) The NTSB has a special group of staff that comprise the Pipeline and Hazardous Materials Division. According to the NTSB:

What Happened
When high-pressure natural gas was released into a low-pressure gas distribution system on September 13, 2018, about 4:00 p.m. Eastern Daylight Time, a series of explosions and fires occurred in the northeast region of Massachusetts’ Merrimack Valley. (See figure below.) The distribution system was owned and operated by Columbia Gas of Massachusetts, a subsidiary of NiSource. The system over-pressure damaged 131 structures, including at least five homes, destroyed in the city of Lawrence, and the towns of Andover and North Andover.

Most of the damage was a result of structure fires ignited by gas-fueled appliances. Several structures were destroyed by natural gas explosions. One person was killed, and at least 21 individuals, including two firefighters, were transported to the hospital. Seven other firefighters suffered minor injuries. 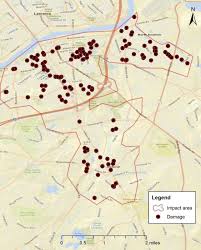 In the aftermath of the explosions, in its subsequent and ongoing investigations, the NTSB issued a November 2018 preliminary report, stating in part the context for the incident:

“The cast-iron, low-pressure natural gas distribution system was installed in the early 1900s and had been partially improved with both steel and plastic pipe upgrades since the 1950s. The low-pressure distribution system in the affected area relied on 14 regulator stations to control natural gas at the required pressure into structures serviced by the system. Each of the regulator stations reduced the natural gas pressure from about 75-pounds per square inch, gauge (psig) to about 12 inches of water column (about 0.5 psig) for delivery to customers.¹

NTSB investigators learned that, until about 4 years ago, Columbia Gas required that a technician monitor any gas main revision work which required depressurizing the main. The technician—typically from the Meter and Regulation department—would use a gauge to monitor the pressure readings on the impacted main and would communicate directly with the crew making the change. If a pressure anomaly occurred, the technician could quickly act to prevent an overpressurization action. Columbia Gas offered no explanation as to why this procedure was phased out.

Although the Columbia Gas monitoring center in Columbus, Ohio, received high-pressure alarms and reported the event to the Meters and Regulations department two minutes after receiving the first alarm, there were no technicians prestaged or positioned to immediately close valves when the overpressurization occurred. Had Columbia Gas adequately performed MOC (Management of Change) and placed personnel at critical points along the system, Columbia Gas could have immediately addressed the issue and mitigated the consequences of the event. Therefore, the NTSB recommends that NiSource apply MOC processes to all changes to adequately identify system threats that could result in a common mode failure. Additionally, the NTSB recommends that NiSource develop and implement control procedures during modifications to gas mains to mitigate the risks identified during MOC operations. Gas main pressures should be continually monitored during these modifications and assets should be placed at critical locations to immediately shut down the system if abnormal operations are detected.

The NTSB report recommends NiSource do the following:

¹Inches of water column is a unit of pressure measurement that is typically used for low-pressure gas systems, such as a low-pressure natural gas distribution system.