Second Navy Ship Collides – What is going on?

First, God bless the missing and dead sailors and their families and shipmates who experienced this, the second crash in the past two months.

I’ve waited a couple of days to comment on this second Navy collision with fatalities because I was hoping more information would be released about what happened to cause this collision at sea. Unfortunately, it seems the Navy has clamped down on the flow of information and, therefore, no intelligent comments can be made to compare the collision of the USS John S. McCain with the earlier collision of the USS Fitzgerald. 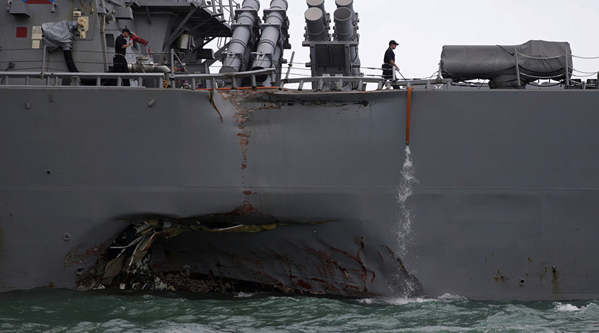 What do we know?

Of course, we know what they did to those involved in the previous accident (see my previous article HERE).

Was the timing of this second collision just bad luck?

We could use the Navy’s collision statistics to answer that question. Of course, you would have to agree about what is a collision. Would a grounding count? Would there have to be injuries or a fatality?

We would then use the advanced trending techniques that we teach in our pre-Summit trending course to see if the second collision was so close in time to the first that it indicated a significant increase in the collision frequency. To learn about these techniques, see:

Since we don’t have facts (and will probably never get them), what is my guess? The things I would consider for this accident are the same as for the last. Look into what happened including:

What should the Navy do? A complete, detailed TapRooT® Investigation.

Admiral Richardson (formerly the head of the Navsea 07 – the Nuclear Navy) has the right words about the analysis the Navy is performing. What is missing? A systematic guide for the investigators and prevent them from jumping to conclusions.

In a TapRooT® Investigation, we would start collecting facts and developing a SnapCharT® to truly understand what happened. Next, we would identify all the causal Factors before we started analyzing their root causes using the Root Cause Tree® Diagram. Then we would consider the generic causes and develop effective (SMARTER) corrective actions. Unfortunately, this will be hard to do because of the Navy’s tradition of blame.

Some of my friends have been asking if I thought that some type of sabotage was involved. Some sort of hacking of the combat systems. In my experience, unless it was extremely foggy, you should be able to use your eyes and the simple bridge radar to navigate. You don’t need fancy technology to keep you from colliding. Simple “constant bearing decreasing range” tells you a collision is coming. To prevent it, you turn or slow down (or perhaps speed up) to get a bearing rate of change to bring the other ship down whichever side is appropriate (use the rules of the road).

The trick comes when there are multiple contacts and restricted channels. That’s when it is nice to have someone senior (the Commanding Officer) on hand to second-check your judgment and give you some coaching if needed.

Most of the time you spend on the bridge is boring. But, when you are steaming in formation or in a shipping channel with lots of traffic, it quickly goes from boring to nerve-racking. And if you are fatigued when it happens . . . watch out! Add to that an inexperienced navigation team (even the Commanding Officer may be inexperienced) and you have an accident waiting to happen.

Is that what happened to the USS John S. McCain? We don’t know.

What we do know is that the Navy’s typical blame and shame response with a safety stand-down thrown in won’t address the root causes—whatever they may be—of these accidents.

What can you do? Advise anyone you know in a position of responsibility in the Navy that they need advanced root cause analysis to improve performance. The young men and women that we send to sea deserve nothing less. Navy brass needs to end the blame game and coverup, and implement truly effective corrective actions.