Where Did the Summit Come From and Where is it Going?

We started planning the first Global TapRooT® Summit (back then it was called the TapRooT® Conference) in 1993. Ever since the success of the first Summit in 1994, we have been improving each year throughout the Summit’s history to make the Summit the best place to:

We have developed an outstanding event that you will enjoy and take back valuable lessons to your company. How valuable will these lessons be? So valuable that we provide this guarantee:

Attend the 2020 Global TapRooT® Summit. Go back to work and
implement your road map to success. If you don’t save 10 times the
cost of your attendance at the Summit, let us know and return your
Summit materials and we will refund 100% of the Summit registration
fee. This guarantee shows how certain we are that you will learn
valuable best practices to take your facility’s performance to the next level.

Read on to see how the Summit developed over the years. But first, a preview of the 2022 Global TapRooT® Summit…

The 2022 Global TapRooT® Summit will be held at the Knoxville Convention Center in Knoxville, TN, on May 2-6. We had planned to have a regular face-to-face Summit this year. But we’ve had several people from continents outside North America tell us that their company still won’t allow travel because of COVID. And they begged us to let them attend virtually. Therefore, we decided that we will have a face-to-face Summit with a virtual option for those that face travel restrictions.

Who will be our Keynote Speakers?

Plus there’s more. Eight Best Practice Tracks with over 40 talks including talks by:

Plus, we have nine pre-Summit Courses.

Want to find out more? Visit the Summit website.

Then see the complete schedule of Best Practice Track Sessions.

I know the Summit will help you:

Now, for the history, read on! And if you attended one of these Summits, leave a note in the comments section below.

Our first Keynote Speaker was Dr. Charles O. Hopkins, University of Illinois, a human factors expert, and my mentor. He spoke to the 33 participants about applying human factors to improve human performance.

We held many sessions on root cause analysis and incident investigation and shared ideas on improving performance.

We ended the Summit with a steak cookout at Cades Cove in the Smoky Mountains. How did we pull it off? Seriously, I look back and don’t know. Our staff was only four people. But we knew we would do it again.

Disney was a great place to hold the second Summit. The Orlando Summit was the first Summit to include pre-Summit TapRooT® Courses. With 77 people attending the Orlando Summit, we invented the Name Game as a way to maximize networking.

Our third Summit institutionalized sponsoring a social activity/reception. In Nashville, the choice was clear – the Grand Ole Opry.

Again, the number of people attending grew. Plus, as usual, we were ahead of our time. The 1996 Summit had a session dedicated to learning from medical errors at hospitals (three years before the publication of Lucian Leape’s call to action: To Err Is Human – Building a Safer Health System).

1997 was the first Summit in Texas and the first Summit with over 100 participants. It was bigger and better in every way. More networking, learning, speakers, tracks, and pre-Summit Courses. And everyone enjoyed the reception and the diner at the Alamo, and the Riverwalk just outside the hotel.

The Southfork Ranch hosted the 1998 Summit. A JR look-alike crashed the Summit reception at JR’s mansion. Everybody had a blast.

This Summit was also the start of presenting TapRooT® Users with Success Story Awards. A great way to share best practices.

Remember the Y2K scare? Well, we all made it through it and had the 2000 Summit.

Above are Mark Paradies and Linda Unger with Shuttle Astronaut Mike Mullane our Friday keynote speaker. He explained the first Shuttle disaster and how Summit attendees could achieve operational excellence.

2001 Summit almost didn’t happen. Two days before the Summit, a tropical storm dropped two FEET of rain on Houston and Galveston! But the show went on…

At the Summit, we had great Keynote Speakers. That’s Mark and Ed with one of the keynote speakers. Also, Dr. John Grout talked about how mistake-proofing (Poka-Yoke) fits into an improvement program.

Back to Gatlinburg for the 8th TapRooT® Summit. That’s Linda, below, introducing one of the Best Practice Session Speakers, Dave Prewitt, VP from Alaska Airlines. Other speakers included people from the NTSB and Steve Hawkins, Administrator of Tennessee OSHA.

Participants said it couldn’t get any better. But they were wrong. We continued to improve!

Wow! Interesting keynote speakers, great networking, and tons of best practice sharing. The Summit that couldn’t get better (according to the previous year’s participants’ feedback) hit a new high.

The Advisory Board went on a Riverwalk cruise.

That’s Mark Paradies, one of the Keynote Speakers, giving a talk about performance improvement. Everyone went home with many new best practices to share and new connections to continue to network with.

The 2012 San Antonio TapRooT® Summit was the first Summit with more than 200 participants!

We had Heinz Block speak about the Equifactor® Equipment Troubleshooting Techniques and an Olympic three-time gold medalist, Josh Davis, talked about achieving success and inspiring your kids.

Each year the Summit gets better and better.

2008 marked the 20th Anniversary of System Improvements. And the 2008 Summit was bigger and better than ever before!

Elvis stopped by our reception to sing us a few tunes.

We had great Keynote Speakers, including one of the operators on duty at Three Mile Island during the accident and a pilot from the Gulf War who had been wrongly prosecuted for a human error.

By now you should realize that you don’t ever want to miss a Summit because of the great topics, speakers, and best practices that will change your ideas about performance improvement.

Yes, the Great Recession struck. But we still had over 200 people attend the Summit Nashville Summit. Despite tropical storms, the Great Recession, and COVID, we have NEVER canceled a Global TapRooT® Summit. Our loyal clients know the Summit’s value and strive to attend no matter the weather or economic conditions.

As usual, we had a great reception with a Disco theme.

We even got Ken Reed to dance! (If you missed it, that will never happen again.)

The Keynote Speakers at the 2010 Summit included the co-pilot of the “Miracle on the Hudson” flight – Jeff Skiles. As usual at the Summit, there were great best practices shared in addition to the usual networking and benchmarking.

The reception was a Halloween costume party …

Back to Las Vegas! This was the first Summit with over 300 participants. We had Ken Mattingly, an Apollo Astronaut, as our closing Keynote Speaker.

And a great reception at Margaritaville!

Another great Summit in Gatlinburg, TN. Bill Rancic, the first winner of the TV show, The Apprentice, shared insights on the competition and motivated us all to give our best effort to make improvements happen. 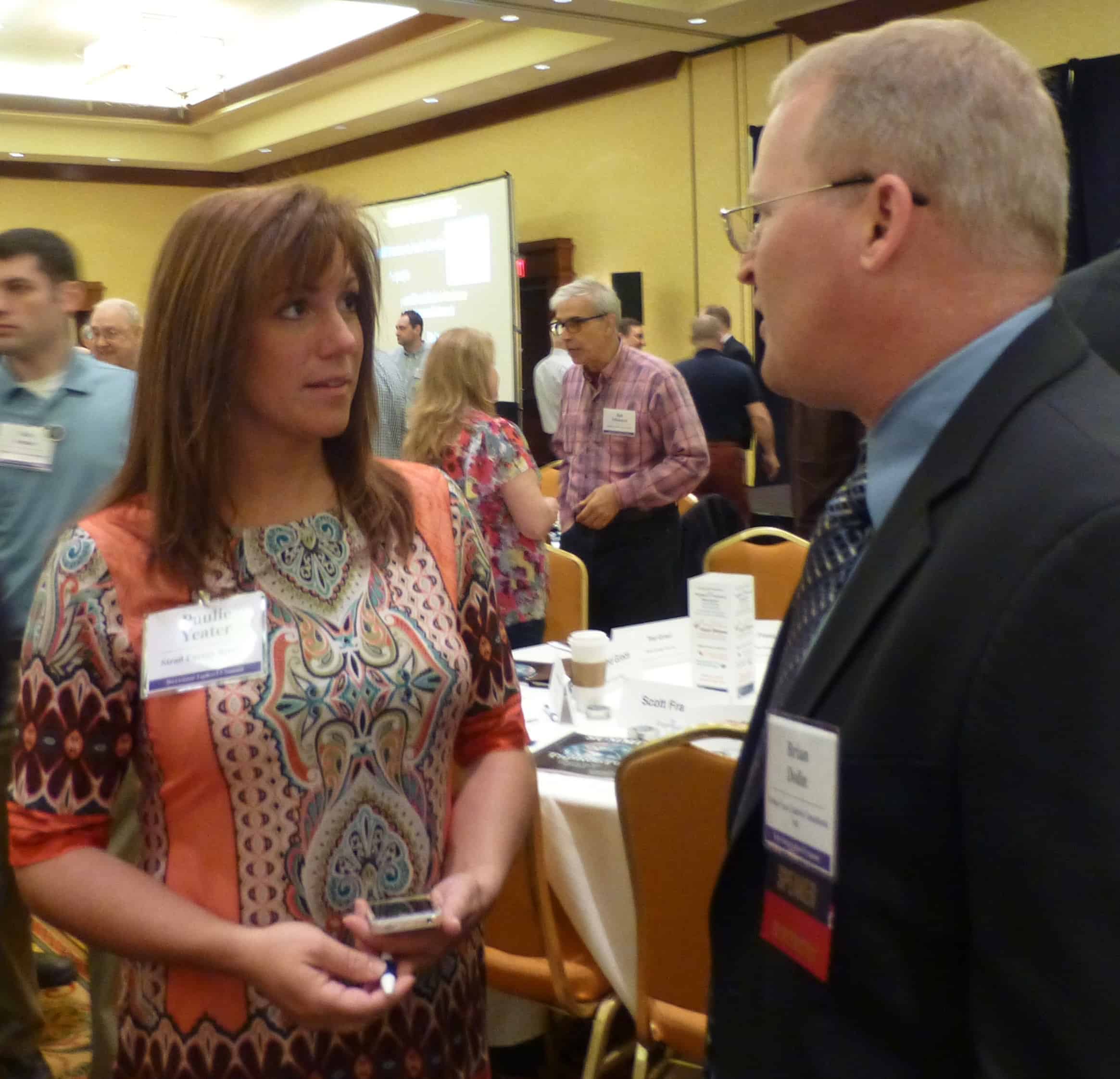 This was our first Summit at the Horseshoe Bay Resort. Above is a picture from the “Name Game.” Meeting people is how we start every Summit.

And above is a picture of people absorbed in one of the Best Practice Track Sessions where they are learning about a best practice.

Another great Summit in Vegas! Captain Richard Phillips was our closing speaker. No wonder they made a movie out of his heroic experience!

And below is Linda Unger giving out Success Story Awards…

Great Keynote Speakers, including Mike Durrant (Blackhawk Down), made the 2016 TapRooT® Summit in San Antonio another success.

2018 was the first time we held the Summit in our hometown – Knoxville. People loved it! Downtown has lots of activities and dining within walking distance of the Knoxville Convention Center.

Once again, we had great speakers, including Inky Johnson, Carl Dixon, and an interview with a survivor of the Deepwater Horizon accident, Mike Williams. Here are some highlights in a video…

And here are some comments about the 2018 Summit and the pre-Summit Courses from participants.

2019 was the first Summit held in Houston and it was great! We had Astronaut, Jim Wetherbee, speak about high-reliability lessons learned from space.

At the reception (western theme), we got Michelle, Mark, and Ken to back up Carl Dixon signing the Eagles tune, Take It Easy.

Another great Summit is described in the brochure below…

This Summit ended at the start of the COVID pandemic. We were lucky to complete the Summit just before the restrictions started. Nobody caught the dreaded virus even though no masks were worn (the guidance then was not to wear them). Perhaps it was because we used up gallons of hand sanitizer. We gave out individual containers to each attendee. (We bought the last supply in Knoxville and brought them to Texas.) It was almost as valuable as toilet paper!

The 2021 Global TapRooT® Summit was a HYBRID Summit – held both virtually and in person.

Once again, we had some great Keynote Speakers including Shannon Miller (above) and Inky Johnson (below).

This was our first comeback from COVID Summit and we didn’t know what to expect but the combination of virtual and live (although hard to pull off) was a success.

Have You Registered for the 2022 Summit?

You don’t want to miss these Keynote Speakers…

Or fun while Carl Dixon plays at the reception…

So, CLICK HERE to register and get your travel plans made!

And if you can’t travel (company or country restrictions)? Sign up for the VIRTUAL version. It’s the next best thing if you can’t be there in person.