Was Fatigue a Root Cause of BP Texas City Explosion?

From the CSB Press Release about the root cause analysis of the BP Texas City Refinery explosion, I found the following info:

“By March 23, operators had been working 12-hour shifts for 29 or more consecutive days. “Fatigue causes cognitive fixation and impaired judgment and could lead operators to fixate on one operational parameter – such as the apparently declining liquid level – to the exclusion of other indicators,” Ms. MacKenzie said. Fatigue has been recognized as a cause of major accidents in the transportation sector. Fatigue prevention regulations have been developed for aviation and other transportation sectors, but there are no fatigue prevention guidelines that are widely used and accepted in the oil and chemical sector.”

29 days on 12-hour shifts. I remember the feeling of severe fatigue.

My experience was 46 days on 12-hour shifts. We almost had an electrician get electrocuted. (Was it a near-miss or should have we called it a precursor incident?) We didn’t conclude that fatigue was a factor. (This incident occurred way before I invented TapRooT® Root Cause Analysis.) But now I know that it was related to fatigue.

When I hear that operators were on day 29 of 12-hour shifts … the “bad decisions” made based on faulty indicators just before the BP Texas City explosion start to make more sense. And firing the operators and supervisor after the accident makes little sense.

If you are interested in a way to judge if fatigue is a cause of an incident, you should see the questions about fatigue in the TapRooT® Root Cause Analysis Dictionary. 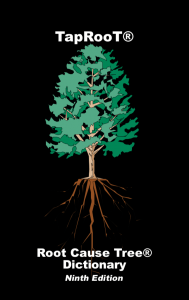 The Root Cause Tree® Dictionary is included in the course materials in every TapRooT® Root Cause Analysis Course.