Example from the Computer World… 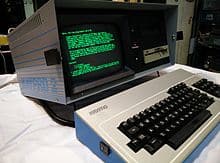 My first computer was a Kaypro II with two 256K floppy drives. It cost a little over $1,200. It had a 9″ diagonal phosphorus green screen and ran on a CP/M operating system. It had lots of manuals. The store trained me in the basics of using it (it took several hours). Two programs came with it: BASIC and WordStar. I used BASIC to program engineering assignments and WordStar to write my Master’s thesis. A good day’s work using WordStar was reformating the margins of a page. (It took that long to figure it out reading the manual and then using trial and error to get what you wanted.)

When I went to my next job they let you pick your computer type. They had three choices:

Because I had training as a human factors engineer, I decided to try each of the versions before I made my choice.

First, I tried the IBM AT. Many coworkers had already chosen this as their standard because it was made by IBM. It had a similar operating system to CP/M (MS-DOS) and the programs were just as user-unfriendly. It came with a dot matrix printer. It didn’t have much for graphics capability. All the programs were sold separately. It had a big manual and you had to sign up for courses to learn how to use even the most basic programs. I wasn’t impressed. 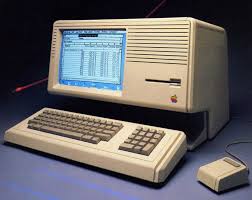 Next, I slid over and tried the Mac. I turned it on and it started up to a screen with icons on it. There was no dot-prompt ( c: ). I asked, “What do I type in to get this started?” The person running the lab said that you didn’t have to type in commands. You used a mouse to click on icons and start programs. I’d never seen a mouse so he took about 30 seconds to show me how it worked. I then started clicking on programs and, to my surprise, I could instantly start using them. They were intuitive. I could use the word processor with no training and no manual. I could reformat pages in a snap. The screen was WYSIWYG (What You See Is What You Get). It had several different “fonts” and I tried many of them. I tried a drawing program. I could use it too. I tried a spreadsheet. I could even use it. The programs came bundled with the Mac I chose (a LISA pictured above). I asked what kind of printer the Mac used. He said it could use the dot matrix printer but, if I could get approval, there was a laser printer. I had never seen one of those. But when I did, I knew what I wanted. I was sold on the Macintosh operating system and Apple. And I got the LISA, the laser printer, and all the software for about $9000.

Next is Steve Jobs in his younger days introducing the Macintosh – my third computer and SI’s first computer. The cheering in the video was because the computer was amazing (for 1984). You couldn’t do anything like that on an IBM AT.

I never even tried the Commodore 64.

What Does This Have To Do With Human Performance?

The Mac was the first “human-factored” personal computer. Instead of having big manuals and tons of training to figure out how to use even the most basic programs, it was intuitive. With about a five minute introduction, you were off and running. It had a mouse and a hard drive. Good human engineering replaced Training, Procedures, and Work Direction and allowed me to publish reports with graphics and graphs that the PC users had to have the art department produce (at $500 a page and $100 for every revision). I could produce a 20-page presentation in an afternoon. My co-workers took at least a week (maybe two) working with the art department and it cost them $10,000 in art department fees (more if they wanted to make changes).

There was a trade-off. Ease-of-use was built into the Mac. Because it was simple and intuitive, you didn’t have to be a programmer to use it. You didn’t need much, if any, IT support because everything was plug-and-play (which was unusual in 1985). But the IT folks and programmers hated it. It made them much less valuable. You didn’t need supervision (Work Direction) to use the Mac.

In the TapRooT® Root Cause Tree®, you can depend on Training, Procedures, Human Engineering, or Work Direction to improve human performance. And in the Stopping Human Error Training (the next one coming up on September 15-16 in Knoxville, TN) we will teach you about the power of human engineering in achieving excellent human performance. The concepts of human engineering are built into TapRooT®. TapRooT® and the Stopping Human Error Training can help you make errors much less likely.

Of course, MS-DOS was eventually replaced by Windows – which tried to equal the ease of use of the Mac. The PC became the “business standard.” But I was always an Apple Mac fan (and still am today). And we’ll use an Apple PowerBook when we teach the Stopping Human Error Course.