A contractor working for Allrig died following the incident on board the Seadrill-owned West Neptune drillship at 1:30 pm (CST) on January 24, a Seadrill spokesperson said in a brief statement.*

On January 24th, at approximately 13:30, two service provider personnel (an inspection team leader and assistant) were performing loose lifting gear inspections on and around the riser deck area of a drillship in the U.S. Gulf of Mexico. The task was visually inspecting slings, recording serial numbers, and applying the current color code.

During the inspection, the inspection team leader observed two slings rigged up to a load of 5 metal plates which were stacked vertically, resting on dunnage, and secured to a stanchion by a single 2” ratchet strap (see Figure 1). The slings had been left in place on the plates after they were landed by the crane for efficiency and ease of relocation when needed.

The plates on the drillship were all 4 x 8 feet; three were 3/8” thickness and the other two were 1” thickness (see Figure 2). 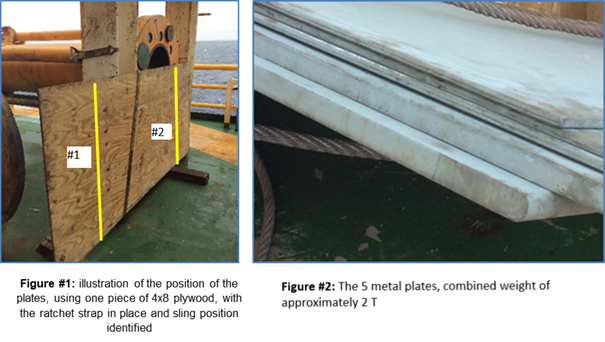 The inspection team leader attempted to, and was successful in, sliding one of the slings from the plates on the inboard side (#1 represented above in Figure #1), but he discovered the second sling (#2 represented above in Figure #1) was pinched between the rear of the plates and the stanchion,
preventing it from being taken off on the outboard side. He then called his assistant and requested that he loosen the ratchet strap, presumably to allow for movement of the plates for the pinched sling to be removed for inspection.

On the drillship, the inspection team leader then leaned his back against the plates. The reason for this is unknown, but it is assumed the intention was to support the plates in their standing position when the ratchet strap was loosened

When he was standing in this position, directly in front of him was a framework for the drilling bail rack. When the ratchet strap was manipulated by the assistant, the hook (ratchet strap) released (see Figure #3), allowing the plates to free fall forward (away from the stanchion)
under their own weight, fatally trapping the inspection team leader between the plates and the framework of the drilling bail rack (see Figure #4).

The weight of the falling metal plates, overwhelmed the lead inspector, who was caught in the line of fire and pinned between the plates and the solid frame.

First responders arrived at the scene and attempted to manually remove the plates but were unable to due to their weight.

• Inability to identify and manage task deviations, resulting in the original low-risk, routine task turning into an unplanned high-risk task.
• Worker was in the line of fire with his body placement between a dynamic load and a fixed structure
• Sea Fastening securing load was manipulated

• Line of fire awareness – reinforce with all personnel the importance of avoiding body positioning in the of line of fire, including avoiding getting between loads and structures
• Risk perception and stopping the job are essential to working safely
• Ensure tasks are clear and well-planned, including pre-job discussion of factors that would necessitate stop work and reinforce the need to stop and reassess when the task changes. In this incident, a low-risk task of visually inspecting loose lifting gear changed to a much higher-risk task without the team recognizing they were deviating from their task – by removing
rigged-up slings on sea-fastened cargo, the nature of the task and risk profile changed. It was no longer a low-risk task of visually inspecting loose lifting gear at that point
• Where there is a prolonged activity with multiple steps (e.g. a task or program of work extending over multiple tours or areas of the rig,) ensure the overall risk and the risk of each step been fully understood by all involved
• Are there sufficient measures in place to prevent unauthorized manipulation of sea fastenings? Service provider personnel may not recognize cargo straps as sea fastenings when a rig is in operation. Procedures, including the use of warning tags, should be reviewed to ensure it is clear what needs authorization to release or manipulate
• Review housekeeping and sea-fastening – are materials around the rig stored safely and has the potential for gravitational energy to be released been minimized as far as practical (e.g. if a strap comes loose, will the stored material fall or tip over?) Can this be mitigated by storing
in an alternative location or an alternative orientation (e.g. by lying flat)?
• Service providers are in integral part of an offshore operation. Ensure service providers and crew are fully integrated into daily operations management and supervision of activities

This incident is from IOGP (International Association of Oil & Gas Producers) Safety Alerts, Safety alert 324, May 2021.

TapRooT® training is global to meet your needs. If you need particular times or locations, please see our full selection of courses.