It was gut-wrenching to watch the fire progress, live on TV.  It is hard to watch so much history destroyed forever.  Luckily, the firefighters did an amazing job preventing the total destruction of the structure.  Initial assessments indicate the cause of the fire was most likely an electrical problem in the attic where restoration work was in progress. 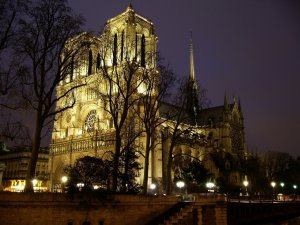 So what happened?  Surely there must have been a plan in place to both prevent a fire in the first place, and then to properly fight the fire afterwards.  One of our instructors sent me a link to a New York Times article that at least gives us an initial look at the fire procedures that were in place.

It’s amazing how a single initial assumption about your disaster response can change your entire incident response plan.  In this case, the article indicates that there was a base assumption made that a fire in these large oak timbers would progress at a slow rate, and therefore the initial response did not have to be quick and robust.  It was felt that there was plenty of time from initial discovery until fire response was on scene.  Experts have since refuted this assumption.  Experts are in agreement that those old timbers will burn extremely quickly, and it was pretty obvious that this was true.

In this particular case, it was 31 minutes from the first fire alarm until the fire department was called.  Ask any firefighter – 31 minutes is a LONG TIME.

After reading the article, I identified several Causal Factors that just jump off the page at me.  Obviously, this is not a completed investigation, but there is some good information here that would at least start off a SnapCharT.  Take a look at the article, and let me know in the comments below what you think would be some of the Causal Factors in this incident.