Do You Understand the Heinrich Pyramid?

Back in 2007, I wrote a short article and gave several talks at professional society conferences about the “accident pyramid” or the “Heinrich Pyramid.” At the time, people were saying that the pyramid wasn’t accurate or useful for safety improvement. I think that much of the misunderstanding, misconceptions, and debate starts with the misuse of what the pyramid represents.

Thus, because the events are similar, ALL 330 events could have caused a major injury, but 329 did not because of luck or some other circumstance.

Others Introduce Modifications to the Model 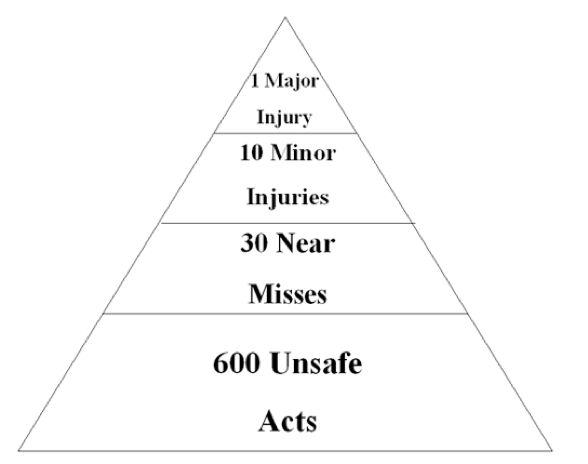 People interpreted this graph as meaning that for every major injury there would be 600 unsafe acts. Sometimes people didn’t say that the unsafe acts had to be capable of causing the major injury. And that started some misconceptions.

Also, there was the Krause, Hindley, and Hodson Pyramid (The Behavior-Based Safety Process, 1990)… 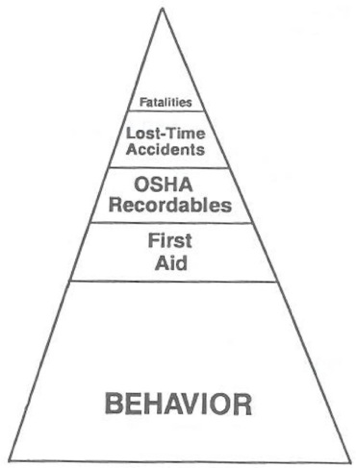 This replaced many of the terms on the pyramid and introduces behavior as the ultimate cause of injuries and fatalities. This caused more misconceptions.

And finally, the nuclear incident iceberg… 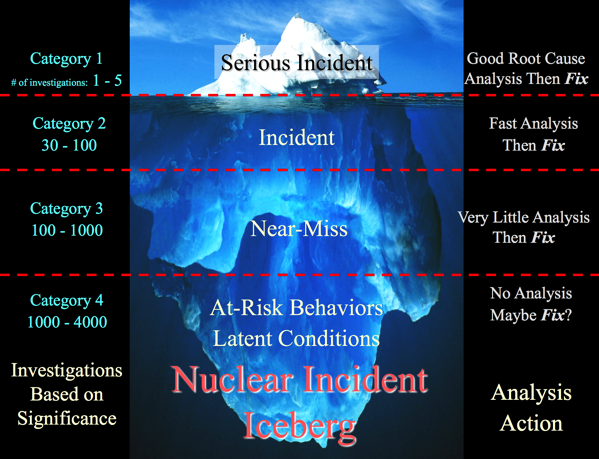 Which, once again, focussed on behaviors and latent conditions and didn’t mention the significance of the Safeguard that were being weakened. More misconceptions were introduced into performance improvement programs.

What Were the Misconceptions?

How Did Misconceptions Influence Safety Programs?

None the less, some safety programs were misled into thinking that stopping first aid cases would lead to an end to fatalities. Improvement programs were overwhelmed by small problems to investigate and fix. Investigators started using questionable root cause analysis tools to speed up investigations to reduce the impact of being overwhelmed.

Thus, even incidents that had the potential to cause major accidents/process safety disasters/fatalities were investigated using questionable root cause analysis tools. The result was ineffective corrective actions that didn’t solve the problems and stop major accidents.

Companies improved their first-aid cases (or at least less were reported) but continued to have fatalities and major accidents at about the same rate.

One example of the impact of the emphasis on minor injuries that I observed first hand was that supervisor at a site I was at learned to carry a first-aid kit to treat minor injuries and stop people from going to the site nurse/doctor. The result? First-aid cases dropped dramatically. This wasn’t a safety improvement. It was a way to improve statistics and keep management off the supervisors’ back.

About a decade ago, some of the same people who revised the Heinrich Pyramid realized that correcting the causes of first-aid cases was not preventing fatalities. Thus began the research on significant injuries and fatalities (SIFs). The researchers came up with a new model… 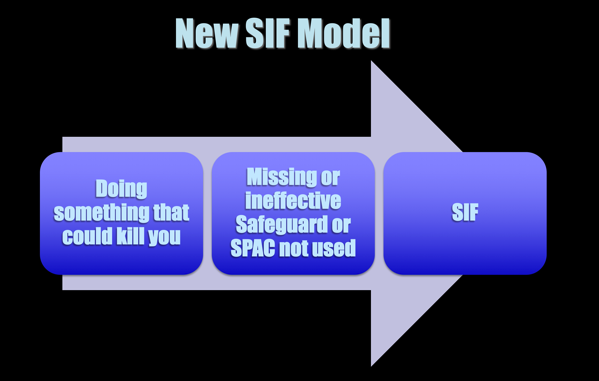 This put the emphasis on industrial safety back on the activity (energy) that could kill you and the Safeguard that kept you safe.

To improve on past Safeguard Analysis, a new energy theory has been proposed that only incidents involving hazards with certain minimum energy should be investigated to prevent a fatality or a major injury. For example, if someone falls off a single step, this is unlikely to cause a significant injury because the energy is too low.

To keep this new theory based on science rather than guesswork, people separating real precursor accidents from minor incidents must calculate the energy necessary to cause a major injury for a variety of different types of energy. This can help you can consistently calculate what is “inside the diamond” (could cause a major injury) and what’s outside the diamond (doesn’t need to be investigated). 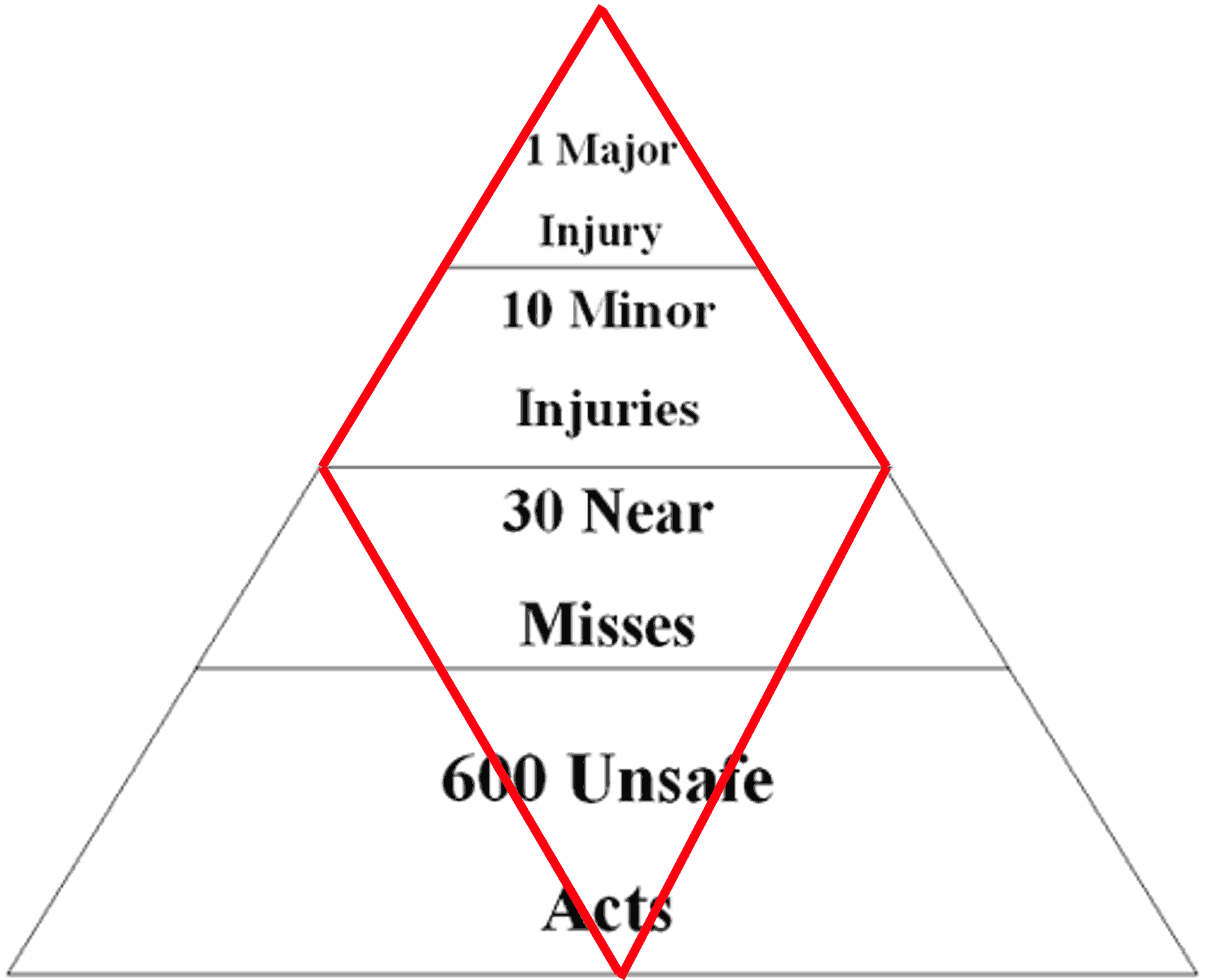 Dr. Matthew Hallowell from the University of Colorado, Boulder (also working with the Construction Safety Research Alliance), is working on these calculations for the energy types shown on the Energy Wheel below (from the Safety Function web site)… 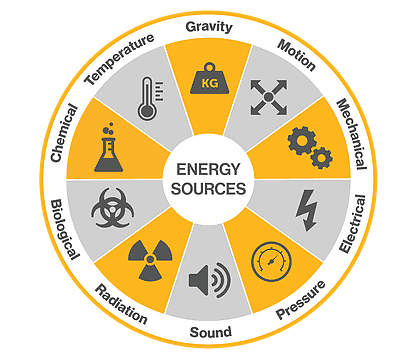 (Sorry – This video was pulled from YouTube on June 9th. I can’t find a replacement. But we are arranging for Matthew to speak at the 2021 Global TapRooT® Summit.)

His work is giving a calculated value to what is a precursor incident (what deserves investigation) That work provides a better, calculated method for separating unimportant near-misses from significant near-misses. The key is … could the energy present in the incident likely to cause a serious injury or a fatality?

Will this work result in a diamond-shaped pyramid? Perhaps. We shall see…

The Diamond and Energy Theory is a good start. But there is more to consider if your safety improvement efforts go beyond industrial worker safety. Some activities (think process safety or driving) can always kill you. (The energy is always there.)

In process safety, there are so many Safeguards that people begin to take the hazard (energy) for granted. Examples? Three Mile Island, Texas City Refinery explosion, Chernobyl, Deepwater Horizon. They start thinking that the maintenance of each redundant Safeguard isn’t that important. After all, there are always other Safeguards to prevent an accident. And one after another, the Safeguards fail until a major accident occurs.

After the accident people proclaim that it is a freak accident, a fluke, a one-off accident that couldn’t be anticipated. After all, they had calculated that it was almost impossible for that many Safeguards to fail.

For process safety, you need to focus on maintaining the multiple, redundant Safeguards and investigate the failure of any Safeguard as an incident. Process safety requires an abnormal level of attention to detail.

In driving, there are very few safeguards to prevent the accident, but several incorporated into the design of the vehicle to try to prevent a fatality.

In traffic safety, the focus on individual skills, adequate rest (fighting fatigue), and highway safety improvements seem to be the most logical approach. 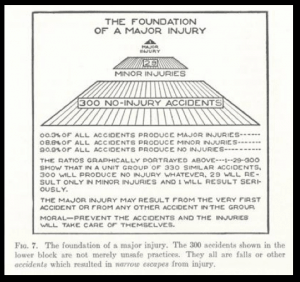 Where are you when it comes to understanding the Heinrich Pyramid? How are you managing your investigations of precursor incidents? Or:

There are ways to investigate precursor incidents efficiently AND effectively and get the most bang for your buck.

Perhaps it is time to learn about advanced root cause analysis and how it can be applied to small incidents that could cause major accidents (precursor incidents) and how this can be done in an efficient manner?

Call us at 865-539-2139 or e-mail us by CLICKING HERE to learn more about TapRooT® Root Cause Analysis and how it can help you stop major accidents.

Or, attend one of our TapRooT® Courses to learn to use the TapRooT® System. Click on the link below for a list of the dates and locations of upcoming TapRooT® Training Courses: