Here is a quote from the report:

“At 0519, the Commanding Officer noticed the Helmsman (the watchstander steering the ship) having difficulty maintaining course while also adjusting the throttles for speed control. In response, he ordered the watch team to divide the duties of steering and throttles, maintaining course control with the Helmsman while shifting speed control to another watchstander known as the Lee Helm station, who sat directly next to the Helmsman at the panel to control these two functions, known as the Ship’s Control Console. See Figures 3 and 4. This unplanned shift caused confusion in the watch team, and inadvertently led to steering control transferring to the Lee Helm Station without the knowledge of the watch team. The CO had only ordered speed control shifted. Because he did not know that steering had been transferred to the Lee Helm, the Helmsman perceived a loss of steering.” 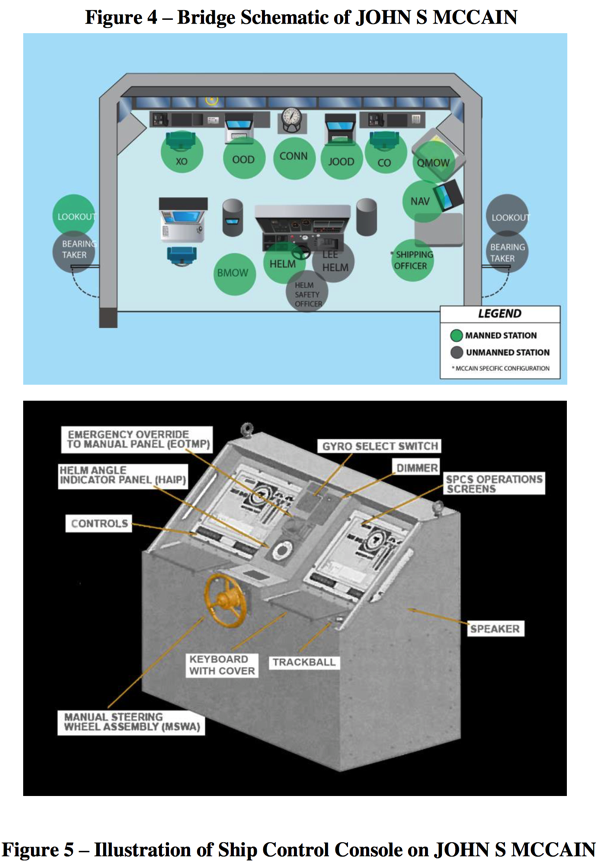 “Steering was never physically lost. Rather, it had been shifted to a different control station and watchstanders failed to recognize this configuration. Complicating this, the steering control transfer to the Lee Helm caused the rudder to go amidships (centerline). Since the Helmsman had been steering 1-4 degrees of right rudder to maintain course before the transfer, the amidships rudder deviated the ship’s course to the left.Additionally, when the Helmsman reported loss of steering, the Commanding Officer slowed the ship to 10 knots and eventually to 5 knots, but the Lee Helmsman reduced only the speed of the port shaft as the throttles were not coupled together (ganged). The starboard shaft continued at 20 knots for another 68 seconds before the Lee Helmsman reduced its speed. The combination of the wrong rudder direction, and the two shafts working opposite to one another in this fashion caused an un-commanded turn to the left (port) into the heavily congested traffic area in close proximity to three ships, including the ALNIC. See Figure 5.” 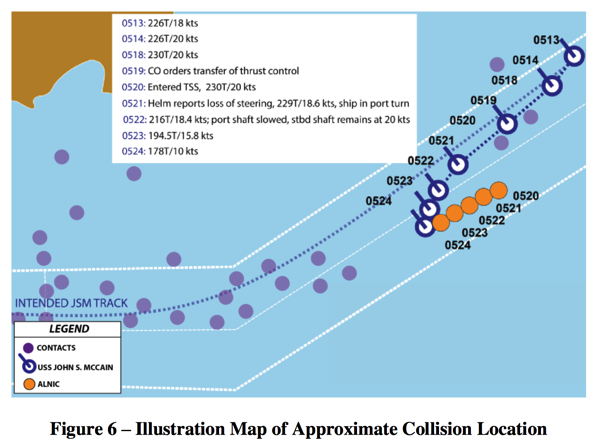 “Although JOHN S MCCAIN was now on a course to collide with ALNIC, the Commanding Officer and others on the ship’s bridge lost situational awareness. No one on the bridge clearly understood the forces acting on the ship, nor did they understand the ALNIC’s course and speed relative to JOHN S MCCAIN during the confusion.Approximately three minutes after the reported loss of steering, JOHN S MCCAIN regained positive steering control at another control station, known as Aft Steering, and the Lee Helm gained control of both throttles for speed and corrected the mismatch between the port and starboard shafts. These actions were too late, and at approximately 0524 JOHN S MCCAIN crossed in front of ALNIC’s bow and collided. See Figure 6.”

Also, from the report:

“Because steering control was in backup manual at the helm station, the offer of control existed at all the other control stations (Lee Helm, Helm forward station, Bridge Command and Control station and Aft Steering Unit). System design is such that any of these stations could have taken control of steering via drop down menu selection and the Lee Helm’s acceptance of the request. If this had occurred, steering control would have been transferred.”

“When taking control of steering, the Aft Steering Helmsman failed to first verify the rudder position on the After Steering Control Console prior to taking control. This error led to an exacerbated turn to port just prior to the collision, as the indicated rudder position was 33 degrees left, vice amidships. As a result, the rudder had a left 33 degrees order at the console at this time, exacerbating the turn to port.”

“Several Sailors on watch during the collision with control over steering were temporarily assigned from USS ANTIETAM (CG 54) with significant differences between the steering control systems of both ships and inadequate training to compensate for these differences.”

“Multiple bridge watchstanders lacked a basic level of knowledge on the steering control system, in particular the transfer of steering and thrust control between stations. Contributing, personnel assigned to ensure these watchstanders were trained had an insufficient level of knowledge to effectively maintain appropriate rigor in the qualification program. The senior most officer responsible for these training standards lacked a general understanding of the procedure for transferring steering control between consoles.”

The Navy report concludes that this problem was related to training. Although training may have been an issue, training was made much more difficult (complex) by a poorly human factored design. The design didn’t consider the user.

In my experience (I was a 1st Lieutenant on a cruiser – the USS Arkansas, CGN-41), Seaman who are Boatswains Mates are the least technically inclined sailors on the ship. These are the people who stand this type of watch. The job of guiding a long heavy ship, turning it, and keeping it on course using a rudder mounted on the stern can be a thing of beauty when an experienced helmsman knows what they are doing. But not everyone standing the watch is that good. Obviously this sailor was having trouble compensating for current (obvious when you see how far he was steering off the ordered track in Figure 6 above).

On the ships that I served aboard (30 years ago), the steering and helm systems appeared quite simple. There was only one console on the bridge to steer from and only one place on the bridge to indicate the ships speed input that was communicated to the throttleman in the engine room. You could shift steering to aft steering, but this was mainly a process of them manually taking over from the bridge. You would then communicate helm orders via sound powered phones.

Also, speed orders could be manually communicated from the lee helm to the throttleman in engineering via sound powered phones.

In the old days, the lee helm was always manned and there would be no “shifting of controls” as occurred in this collision. Instead, if the helmsman was having problems, the Boatswain Mate of the Watch (the supervisor of these watch stations) could step in to provide advice, or, if needed, take over for the less experienced helmsman. In theory, the Boatswain Mate of the Watch was a more experienced helmsman and could be counted on to correct any problem the helmsman had experienced.

However, on these modern cruisers there is an addition order of difficulty. They have made the Navy ships much more like commercial ships that can be steered from various locations. Also, the two jobs of helmsman and lee helmsman can be performed by a single individual. In theory, this can reduce the number of watch standers and perhaps make the steering of the ship easier.

I think the reality is quite different. The computerized controls have reduced the control that a helmsman has and added complexity that can lead to errors. I would like to do a complete human factors review of the system, but I would bet that the steering modes, locations of control, and the controls used to change control locations are not obvious and, thus, contributed to this accident. That is a human factors problem … NOT a training problem.

If you would like to learn a system that includes an expert system to help investigators identify human factors issues, attend one of our 5-Day TapRooT® Advanced Root Cause Analysis Training Courses. See our upcoming public course dates and locations by CLICKING HERE.