Inquoris “Inky” Johnson was a dynamo defensive player at a college football powerhouse . . .  until a life-changing accident.

A sportswriter* relates what happened:

“In more than a dozen years as an SEC football beat writer, the most tragic moment I ever saw in person was on September 9, 2006.

“Tennessee was playing Air Force at Neyland Stadium, and what was expected to be a lopsided game was close in the final moments. About that time, an Air Force player caught a pass near the sideline and a Tennessee cornerback arrived to deliver a hit.

“It didn’t look that bad when it happened, but that cornerback, Inky Johnson, wasn’t moving after the whistle. All the signs of a serious injury played out quickly on the field, with concern on faces before Inky was carted off to a chanting crowd.

“I’d interviewed Inky earlier that week, and enjoyed it. He was a funny, playful, talkative kid from Atlanta. And while football is a game featuring high-impact collisions by very fast, very strong individuals, you see this sort of frightening moment and usually find out the player is going to be okay.

“But we didn’t hear that about Inky.

“Grown, tough men—coaches and players and others around Tennessee’s team—were emotional about the topic for weeks afterward. A life-threatening injury caused Inky to lose the use of his right arm, ending a promising football career in the blink of an eye.”

After he suffered a horrific injury—his right arm was paralyzed—his football career ended. Inky decided to help others through his experience. In effect, Inky turned his experience into a testimony and a “launching pad” to share with others. As a motivational speaker, Inky illustrates the choices one is faced with, underscores making the most of life, and encourages others to make something positive out of challenges in a very unique way. 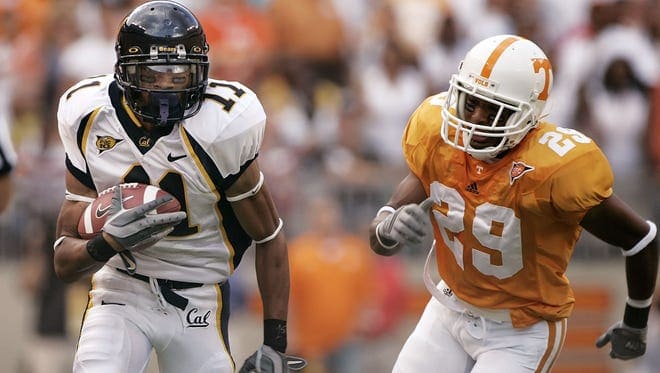 From defensive back to a speaker sharing his life’s story

“I still think about Inky Johnson a lot, but it’s not because of the final football play of his I once witnessed. It’s with an immense amount of admiration because of what he has done with his life since that tragedy.

“Inky got a master’s degree in sports psychology and became an author and motivational speaker, regularly delivering “Ink-spirations” through social media and his talks.

Inky’s message from his experience is one of hope, perseverance, discipline, and faith. Here’s an example illustrating how Inky “brings it”: “Can we be committed to the process without being emotionally attached to the results?”

In a 2018 interview with the Midland Reporter-Telegram in Texas, Johnson explained the message he wanted people to receive from his speeches.

“It’s about persevering, but also paying it forward for the next person. We’re given mountains to overcome and then we have to help other people overcome their mountains by guiding them by sharing our experiences. It’s all about giving back to the world and giving back to humanity.”

We’re thrilled to announce Inky Johnson will be a Keynote Speaker for the 2022 Global TapRooT® Summit, in Knoxville, Tennessee

Learn all about the 2022 Global TapRooT® Summit from the TapRooT® website, as well as in the information below. Registration will be open soon; plan how many from your team will attend to reserve spots for everyone!

The Global TapRooT® Summit addresses issues that you need to improve. How do we know what these issues are? First, we teach root cause analysis to the world’s leading companies. These interactions make us premier “knowledge-brokers.” We use this knowledge to design the Summit to address your biggest challenges.

At the TapRooT® Summit, we make networking fun. The Summit will be the BEST networking and benchmarking event you ever participate in. Meet people from industry-leading companies, performance-Improvement experts, and our knowledgeable TapRooT® Instructors from around the world.

Third, TapRooT® Users share their Success Stories as part of the Summit. Look at the Summit schedule and see the many sessions that address key issues that you are facing. Attend the Summit to learn new best practices to improve performance at your company.

“The final keynote was Inky Johnson.” [From Inky’s appearance at the 2018 Global TapRooT® Summit.]

Regarding the keynote, Mark says, “How can I explain the level of inspiration and energy Inky brought us?

“There was a long line of people happily waiting to personally speak to Inky, thank him, and have a picture taken with him.

“If you don’t know Inky’s story. watch and gather motivation to accomplish more in life.”