Monday Accident & Lesson Learned: Either You Are Leading the Solution or You Are Part of the Problem

I learned the lesson I am sharing in this article while investigating an oil platform fire back in the mid-90’s. But the recent congressional testimony of executives from BP, Transocean, and Halliburton brought the lesson back to mind.

These lessons are NOT just for people in the petroleum industry. They apply to all industries where a major accident could cause loss of life, damage to the company’s reputation (ie, Toyota’s accelerator problems), or a major financial loss.

After a major accident, there are NO clean hands. There is blame enough for everyone. If you are in the chain of command of the organization that had the accident, you WILL be seen as PART OF THE PROBLEM. 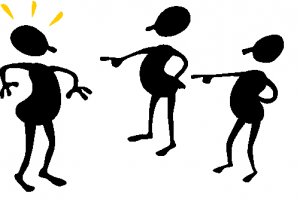 It’s not my fault … YOU are to blame!

Finger pointing is counterproductive. Managers may be able to point out others that share the blame, but they won’t be able to get rid of their share of the blame.

This is true even for the “blessed” level of the corporation. CEOs, Presidents, and Senior Vice Presidents can usually avoid blame for lesser mistakes. But when a major accident – multiple lives lost, extensive environmental damage, and/or a big hit to the company’s reputation and finances – occurs, even the corporate elite can’t escape the blame from the press and politicians.

That’s why the minor amount of finger-pointing by executives at the BP / Transocean / Halliburton hearings only seems to make people more upset. They wanted these executives to accept their responsibility for things that had obviously gone wrong.

Instead of the statement made by BP’s President (which you can watch on the CSPAN videos posted previously on this blog), they should have said something like the following:

Statement I proposed for Lamar McKay, President of BP Americas…


“Chairman Bingaman, ranking member Murkowski, and members of the committee, representatives of the press, and people of America and around the world, I come here today with a heavy and contrite heart for the accident that I have allowed on my watch.

First, let me apologize to the families and loved ones of the 11 workers who were killed in the initial explosion on the Deepwater Horizon. Their loss is tragic and unacceptable, and I pledge here that I will do everything in my power to discover the root causes of the fatal blast so that we can learn from it and ensure that it never happens again.

Second, I would like to apologize to the people impacted by the subsequent release of oil from our well. We at BP are responsible for the environmental damage. BP will pay all valid claims without regard to any liability caps. We will do this because we feel it is our responsibility to compensate those who have been harmed.

The extent of this spill is larger than anything we thought possible. The fact that it happened means that our preparations and measures to prevent the accident were insufficient. We should have been better prepared for the unimaginable. We are currently bringing all the resources we can to bear on stopping the spill and mitigating the damage of the oil that is being released.

Furthermore, we pledge to take the lessons we have learned in the spill response and continue to research ways that we can be even more prepared if something of this nature happens again. Our goal is to find the root causes of the spill and prevent it. But we should never again be caught unprepared if the unthinkable happens.

At BP, we believe there will be a need for a reasonably priced source of oil for decades to come. We pledge our best efforts to find and recover this oil without loss of life or unacceptable environmental damage. By allowing the current accident to occur, we have failed our shareholders, employees, and the American people. For this we are sorry and we hope to be able to prove to you that we can changed course so that we won’t fail again.

As for plans to prevent future accidents, we have put together a team of experts in deepwater oil exploration and root cause analysis to find the causes of this failure. They will be given complete access to all records and personnel to determine what went wrong, how it went wrong, and why it went wrong. The goal of this investigation is not to point fingers and attribute blame. Rather, the goal is to find out how we can improve our performance so that an accident like this one NEVER happens again. Not at BP. Not at any other exploration site around the world.

It is too early to tell exactly what caused the explosion that killed 11 people and started this environmental accident, but I can say that the fact that it happened means that things went wrong. Somewhere down the well, barriers that we thought were sufficient to prevent the blowout failed. Also, the blowout preventer didn’t prevent a blowout. And our planned emergency response efforts were insufficient to deal with the size and scope of the spill that we now face. I am sure that all of these problems could have been prevented if we had foreseen the outcome. Unfortunately, we didn’t. That is a fact that we wish we could change but we can’t.

What we can do is to understand why bad decisions were made so that we can avoid bad decisions in the future. We want to know any mistakes that were made in sealing the well. If industry practices were followed, why they failed. If industry practices were not followed, why that occurred. If we should have preceded differently, we need to find out what went wrong and how we can do to do it right next time. We need to understand why the blowout preventer didn’t function as intended. We also need to understand what we need to do to be better prepared for a large spill.

What I can pledge to you is that BP wants to redeem our reputation. We pledge to become the safest, most environmentally benign oil producer in the world. We pledge to lead efforts to develop safer methods for deepwater drilling and to share the practices across our industry. We will work with our contractors and suppliers to establish much more reliable blowout preventers. We will lead an industry effort to establish an emergency preparedness and response capability up to the challenge of a spill of this size even though we plan to never have anything like this happen ever again.

After my fellow industry colleges have had the chance to share their thoughts about the accident, I would be happy to answer questions about our efforts to discover and eliminate the root causes of this accident and our current efforts to stop the spill and mitigate the environmental damage done.

So to close, thank you for this forum that we can start to express our sincere regret for our past performance and explain how we can start to redeem ourselves with efforts to lead progress in understanding and improving the safety and environmental performance of our company.”

Maybe that is too much to ask. BP management may not be capable of this critical analysis – admitting that they were wrong and need to change BP’s culture.

Also, some of you might think that MARK IS CRAZY. No executive would take this kind of responsibility. Think of future lawsuits. Think of the corporate liability.

But I believe that the company is already guilty by the fact that an “unthinkable” accident has happened. Only if this was a terrorist act or a case of sabotage could BP escape blame. Since there is no evidence of this, BP will be found to have made mistakes that contributed to the accident. You can count on that.

So my conclusion is that defensive management … management that points fingers at others … management that rejects or doubts their responsibility … can’t successfully lead the change efforts that are needed to improve performance and prevent future accidents of this magnitude.

Eventually, these defensive managers WILL lose their jobs because they can’t change something they are defending.

In other words, management all up and down the line – from BP’s CEO to BP’s Company Man on the rig, must recognize their responsibility and their need to lead change or the Management System root causes (which there will be in an accident of this magnitude) will not be fixed.

YOU ARE EITHER LEADING THE SOLUTION …

OR YOU ARE PART OF THE PROBLEM.

Of course, after a major accident, it is customary that managers will lose their jobs. The first targets are those managers on the rig that made decisions the night of the accident. Next, the next level of management up the chain at BP and Transocean. But more senior management should also be worried. The complete management chain – from the Refinery Business Unit Manager to the CEO – eventually resigned or were let go after the BP Texas City explosion.

I believe the ONLY way that managers in this predicament can save their job is to claim their responsibility and then be seen as STRIDENTLY LEADING the change needed to prevent future accidents.

Now for your ideas and comments …

Should management not only admit errors but actually claim their share of the blame?

Can leading positive change save a corporate manager’s job?

Is pointing fingers and shifting blame a better survival strategy?

Is sincerely apologizing and accepting blame too dangerous?