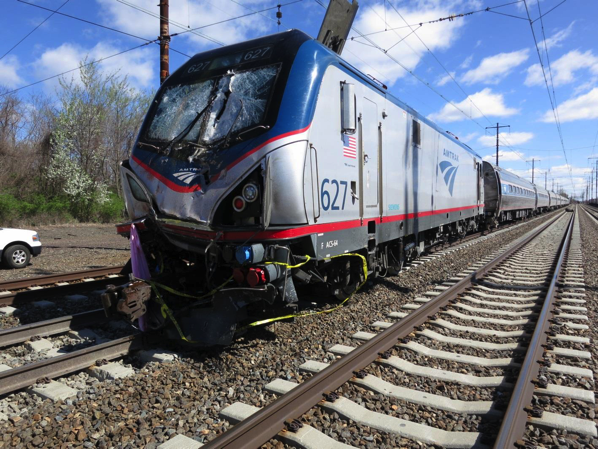 This accident may seem like a simple case of a supervisor failing to make a call. However, the NTSB investigation shows there were many more issues that caused the fatalities.

Here is the press release from the NTSB:

WASHINGTON (Nov. 14, 2017) — The National Transportation Safety Board determined Tuesday the April 3, 2016, derailment of Amtrak train 89 near Chester, Pennsylvania was caused by deficient safety management across many levels of Amtrak and the resultant  lack of a clear, consistent and accepted vision for safety.

A backhoe operator and a track supervisor were killed, and 39 people were injured when Amtrak train 89, traveling on the Northeast Corridor from Philadelphia to Washington on track 3, struck a backhoe at about 7:50 a.m. The train engineer saw equipment and people working on and near track 3 and initiated emergency braking that slowed the train from 106 mph to approximately 99 mph at the time of impact.

The NTSB also determined allowing a passenger train to travel at maximum authorized speed on unprotected track where workers were present, the absence of shunting devices, the foreman’s failure to conduct a job briefing at the start of the shift, all coupled with the numerous inconsistent views of safety and safety management throughout Amtrak, led to the accident.

“Amtrak’s safety culture is failing, and is primed to fail again, until and unless Amtrak changes the way it practices safety management,” said NTSB Chairman Robert L. Sumwalt. “Investigators found a labor-management relationship so adversarial that safety programs became contentious at the bargaining table, with the unions ultimately refusing to participate.”

The NTSB also noted the Federal Railroad Administration’s failure to require redundant signal protection, such as shunting, for maintenance-of-way work crews contributed to this accident.

The abstract of the NTSB’s final report, that includes the findings, probable cause and safety recommendations is available online at https://go.usa.gov/xnWpg.  The final report will be publicly released in the next several days.

The webcast of the board meeting for this investigation is available for 90 days at http://ntsb.capitolconnection.org/.