Monday Accidents & Lessons Learned: Mile 201 in Argentine EEZ Is the Scene for More than Poaching

Above image: The Zhongyuanyu and other foreign fishing vessels (identified by the orange dots) fish at the edge (or over) the Argentine EEZ boundary (image courtesy of the Argentine Navy)

Departing from Trelew, in northeastern Patagonia, Argentina, a P-3B Orion aircraft of the Aeronaval Exploration Squadron, Argentine Air Force No. 3, was performing a routine control flight toward Comodoro Rivadavia. Among the flight’s objectives were training crew members in instrumental entries and landing practices in the airport of Comodoro Rivadavia; the Navy flight was also training pilots in their specific functions on board, among them: radar, radio communications, and photography.

In an overflight of the Exclusive Economic Zone of Argentina (EEZ), the aircraft spotted what is known to the area as the “city of floating lights”—a group of more than 300 vessels, mostly fishing jiggers, in an area known as mile 201, located on the fringes of the Argentine EEZ.

The South Atlantic’s squid season attracts intense fishing vessel traffic, both licensed and non-licensed fishing jiggers, most often from China. Squid vessels are equipped with high-powered lights used to attract squid to the surface and the lines. This congested situation is an annual occurrence, provoking local shipowners due to the absence of rules outside the EEZ and by what locals view as unfair competition.

Amid this scenario of crowded vessels in mile 201, just northwest of the Falkland Islands, on the Friday morning of February 15, 2019, a Chinese flagged jigger sank after colliding with a Spanish flagged trawler. All 30 crew members of the Spanish vessel were rescued by the Spanish trawler and were taken to Montevideo, according to the Argentine Coast Guard. The collision involved the Chinese jigger, FV Zhong Yuan Yu 11, and the Spanish trawler, Pesca Vaqueiro, which went undamaged.

Maritime Control detected the collision via a satellite alarm; the incident was located approximately nine nautical miles from the EEZ.

According to the MercoPress, a South Atlantic News Agency, an official of the Argentine Coast Guard said, “We don’t know the causes of the accident, circumstances are under analysis but the Chinese jigger effectively sank where it was positioned.” Safety4Sea informs us that, “The Argentine Naval Prefecture (PNA) responded to the incident, when it received a distress signal, and diverted the USCG cutter GC-24 Mantilla, which was patrolling approximately 80 nm to the north, to rendezvous with the ‘Zhongyuanyu 11’ in assistance,” and also that authorities have begun an investigation into the incident.

In 2016, an incident developed between Argentina’s Coast Guard and the Chinese fishing vessel Lu Yan Yuan Yu 010, resulting in the Coast Guard firing warning shots at the vessel and, subsequently, the vessel sinking. Also, the squid season was pushed forward in 2017 due to the trend of non-Argentine fishing vessels arriving close to Argentine waters prior to the regulated fishing season commencement date.

Whether you consult The Street, Forbes, Fortune, USA Today, Time, CNBC, Readers Digest, or the Bureau of Labor Statistics’ Census of Fatal Occupational Injuries, fishing continues to top the list among the deadliest occupations. 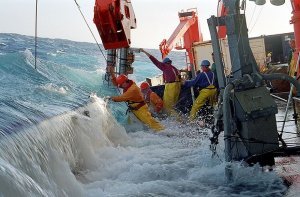 If you’ve seen “The Deadliest Catch” on the Discovery Channel, you may have an idea of the inherent dangers in fishing jobs such as crab-catching: Overboard falls. Hypothermia. Shifts of 18-20 hours (sleep deprivation). Unpredictability of harvest. Mental fatigue. Remote locations with any hope of rescue a complicated, protracted endeavor. Getting caught in coil lines. Performance pressure in a short working season. Extreme conditions and physical stress. The ever-present risk of swamping (being hit by a wave and inability to recover). Equipment failures and incidents. Being dragged or accidentally going overboard. Drowning.

Then there’s the lack of a mandate for implementation of safety protocols, such as use of personal flotation devices; alarm system for person overboard; worker lifeline tethers; onboard safety drills.

Even though, since the 90s and the early 2000s, significant improvements and incentives with ties to safer performance and A DECREASE IN FATALITIES have come into play in fishing, commercial fishing remains an “occupation with a work-related fatality rate of 86 deaths per 100,000 full-time workers in 2016, which is 23 times higher than the national average” (FISHERMEN’S NEWS, June 1, 2018).

Attend one of our COURSES. We offer a basic 2-DAY COURSE and an advanced 5-DAY COURSE. You may also CONTACT US about having a course at your site.