The History of the Definition of a Root Cause

Start of the Definition of a Root Cause

When I started digging into problem-solving back in 1985, people used the term “root cause” but I couldn’t find a definition for the term. I knew some pretty knowledgeable people so I asked them for their definition. They explained what they called a root cause but I found significant variation between these experts’ definitions.

Therefore, David Busch and I (Mark Paradies) started doing research to develop a definition for a root cause. And this is the definition we created back in late 1985 or early 1986:

The most basic cause (or causes) that can reasonably be identified
and that management has control to fix.

As TapRooT® was being developed by Mark Paradies and Linda Unger in 1990 and we “improved” the definition to be:

A root cause is
the most basic cause (or causes)
that can reasonably be identified
that management has control to fix
and, when fixed, will prevent
(or significantly reduce the likelihood of)
the problem’s recurrence.

That definition was starting to be a mouthful.

Other’s Modification to the Definition of a Root Cause

The most basic management system cause
(or causes) that can reasonably be identified
and that management has control to fix.

We never really thought those additional words were necessary.

Also, some became enamoured with the idea of cause and effect and the theory of a chain of causaltion. They defined a root cause as the “initiating” cause of the causal chain. We have never found this definition particularly helpful.

Major Improvement to the Definition of a Root Cause

By 2005, Linda Unger and Mark Paradies realized that the definition that they had developed for a root cause made an incident investigation look negative. We were looking for causes of problems. People would get into arguments about “management’s ability to fix a problem” when what we really meant was that the problem was fixable. We needed a better definition that was focused on improvement. 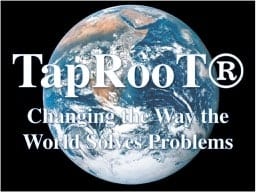 Therefore, in 2006, we published this version of this definition of a root cause:

A Root Cause is
the absence of a best practice
or the failure to apply knowledge
that would have prevented the problem.

What is the difference between our old (and some would say industry standard) definition and our 2006 definition?

The new definition focuses more on the positive. We are searching for best practices and knowledge to prevent problems. We aren’t looking for people to blame or management failures. We are going to find ways to perform work more reliably. This is a focus on improvement.

One more note … The new definition is rather absolute. The words “would have prevented” should probably also include the phrase “or significantly reduced the likelihood of” because, in real life, it is probably impossible to guarantee that a problem will be prevented from EVER happening again. But we haven’t modified the definition because we wanted the emphasis to remain as definite as possible even though we realize that a 100% guarantee probably is NOT possible.

Root of the Root Cause Definition

So, now when you see the definition of a root cause and it looks very similar to the first two definitions, you will know who the original authors were and where the ideas came from.

You will also know that there is a more advanced definition that focuses on improvement.

TapRooT® Users have always been a step (or maybe many steps) ahead of other problem solvers. Even when it comes to the definition of a root cause.

Want to learn more about the TapRooT® Root Cause Analysis System? Attend one of our courses:

Or purchase our ten-book set that provides a complete description of the TapRooT® System. Get more information about the up-to-date complete set of books HERE. And order the books by CLICKING HERE.