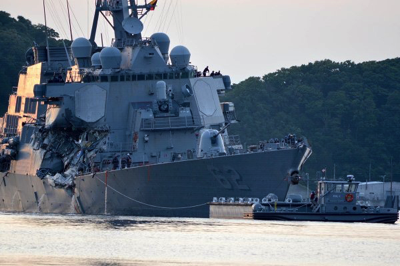 The Navy has taken the first action to avoid future collisions at sea after the crash of the USS Fitzgerald. The only question that remains is:

Why did it take Rear Admiral Brian Fort two months to determine who the Navy would punish?

After all, they knew who the CO, XO, and Command Master Chief were and they could just check the watch bill to see who was on the bridge and in CIC. That shouldn’t take 60 days. Maybe it took them that long to get the press release approved.

The Navy’s Top Secret root cause analysis system is:

Round up the usual guilty parties!

Here is what the Navy press release said:

“The commanding officer, executive officer and command master chief of the guided-missile destroyer USS Fitzgerald (DDG 62) were relieved of their duties by Vice Adm. Joseph Aucoin, Commander, 7th Fleet Aug, 18. Additionally, a number of officer and enlisted watch standers were held accountable. The determinations were made following a thorough review of the facts and circumstances leading up to the June 17 collision between Fitzgerald and the merchant vessel ACX Crystal.”

Yet here is a part of the announcement from the Navy’s PR Officer:

“It is premature to speculate on causation or any other issues,” she said. “Once we have a detailed understanding of the facts and circumstances, we will share those findings with the Fitzgerald families, our Congressional oversight committees and the general public.”

The emphasis above was added by me.

It is premature to speculate on causes BUT we already know who to blame because we did a “thorough review of the facts.”

Now that all the BAD sailors have been disciplined, we can rest easy knowing that the Navy has solved the problems with seamanship by replacing these bad officers and crew members. There certainly aren’t any system causes that point to Navy brass, fleet-wide training and competency, or fatigue.

As I said in my previous article about this collision:

With blame and punishment as the first corrective action, I don’t hold out much hope for real improvement (even though the Navy has a separate safety investigation). Perhaps that’s why I can’t help writing a scathing, sarcastic article because the Navy has always relied on blame after collisions at sea (rather than real root cause analysis). Our young men and women serving aboard Navy ships deserve better.

I won’t hold my breath waiting for a call from the Navy asking for help finding the real root causes of this tragic accident and developing effective corrective actions that would improve performance at sea. This is just another accident – much like the previous collisions at sea that the Navy has failed to prevent. Obviously, previous corrective actions weren’t effective. Or … maybe these BAD officers were very creative? They found a completely new way to crash their ship!

My guess is that Navy ships are being “ridden hard and put up wet” (horse riding terminology).

That’s the way the Navy has always done it since the days of “wooden ships and iron men.” The only change … they don’t hang sailors from the yard arm or keel haul them in the modern Navy. That’s progress!

Bless all the sailors serving at sea in these difficult times. We haven’t done enough to support you and give you the leadership you deserve. Senior naval leadership should hang their heads in shame.