What is the Root Cause of the USS Fitzgerald Collision? 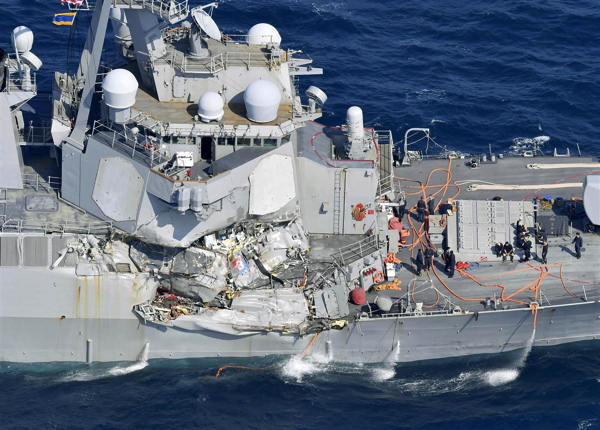 As a root cause analysis expert and former US Navy Officer who was qualified as a Surface Warfare Officer (SWO) and was qualified to stand underway steaming Officer of the Deck watches, I’ve had many friends ask me what was the root cause of the collision of the USS Fitzgerald.

Of course, the answer is that all the facts aren’t yet in. But that never keeps us from speculation…

Also, let’s note that the reason for good root cause analysis is to prevent fatalities and injuries by solving the problems discovered in an accident to keep a similar repeat accident from happening in the future.

Mia Culpa: It’s been a long time since I stood a bridge watch. I’m not familiar with the current state of naval readiness and training. However, my general opinion is that you should never turn in front of a containership. They are big. Even at night you can see them (commercial ships are often lit up). They are obvious on even a simple radar. So what could have gone wrong?

1. It was the middle of the night. I would bet that one thing that has not changed since I was in the Navy is FATIGUE. It would be interesting to see the Oficer of the Deck’s and the Conning Officer’s (if there was one) sleep schedule for the previous seven days. Fatigue was rampant when I was at sea in the navy. “Stupid” mistakes are often made by fatigued sailors. And who is to blame for the fatigue? It is built into the system. It is almost invisible. It is so rampant that no one even asks about it. You are suppose to be able to do your job with no sleep. Of course, this doesn’t work.

2. Where was the CO? I heard that the ship was in a shipping lane. Even though it was the middle of the night, I thought … where was the Commanding Officer? Our standing orders (rules for the Officer of the Deck) had us wake the CO if a contact (other ship) was getting close. If we had any doubt, we were to get him to the bridge (usually his sea cabin was only a couple of steps from the bridge). And the CO’s on the ships I was on were ALWAYS on the bridge when we were in a shipping lane. Why? Because in shipping lanes you are constantly having nearby contacts. Sometimes the CO even slept in their bridge chair, if nothing was going on, just so they would be handy if something happened. Commander Benson (the CO) had only been in his job for a month. He had previously been the Executive Officer. Did this have any impact on his relationship with bridge watchstanders?

3. Where was the CIC watch team?  On a Navy ship you have support. Besides the bridge watch team, you are supported by the Combat Information Center. They constantly monitor the radars for contacts (other ships or aircraft) and they should contact the Officer of the Deck if they see any problems. If the OOD doesn’t respond … they can contact the Commanding Officer (this would be rare – I never saw it done). Why didn’t they intervene?

5. Experience. One thing I always wonder about is the experience of the crew and especially the officers on a US Navy ship. Typically, junior officers stand Officer of the Deck watches at sea. They have from a two to three year tour of duty and standing bridge watches is one of many things they do. Often, they don’t have extensive experience as an Officer of the Deck. How much experience did this watch team have? Once again, the experience of the team is NOT the team’s fault. It is a product of the system to train naval officers. Did it play a factor?

6. Two crews. The US Navy is trying out a new way of manning ships with two crews. One crew is off while the other goes to sea. This keeps the ship on station longer than a crew could stand to be deployed. But the crew is less familiar with the ship as they are only on it about 1/2 the time. I read some articles about this and couldn’t tell if the USS Fitzgerald was in this program or not (the program is for forward deployed ships like the Fitzgerald). Was this another factor?

These six factors are some of the many factors that investigators should be looking into. Of course, with a TapRooT® investigation, we would start with a detailed SnapCharT® of what happened BEFORE we would collect facts about why the Causal Factors happened. Unfortunately, the US Navy doesn’t do TapRooT® investigations. Let’s hope this investigation gets beyond blame to find the real root causes of this fatal collision at sea.