Eight seconds can “make” a cowboy. Professional bull riders have eight seconds in which they must stay on a kicking, spinning, lunging 1,800-pound bull to be scored in a competition. Danger and unpredictability are as much hallmarks of bull riding as is the riders’ requisite ability to handle fear, the loss of any sense of gravity or balancing point, and the physical demands in what’s been named the world’s most perilous sport.

Like many young children drawn to the sport, Missouri native Mason Lowe rode his first calf before attending kindergarten. His drive to be part of the professional bull riding circuit was fueled by watching his father, grandfather, and uncles ride and compete. He was looking for the rankest* of roughstock by the time he turned 12. At 15, Lowe sidestepped high-school rodeos for summertime amateur bull riding competitions. He became a professional rider on tour with the Professional Bull Riders (PBR) Association at 18. At 25, he was ranked 18th in the world, having competed in the PBR for seven years.

In 2016, Lowe talked to PBR.com about his release of passion during a competition, “If you don’t show a little bit of emotion, I mean, you are not fully committed.” The rider went on to talk about winning, “If you don’t get a little bit mad (when you fall off), you are not doing it for the right thing. I know how good I am and how good I can be. When I get bucked off, it kind of just fires me up.” 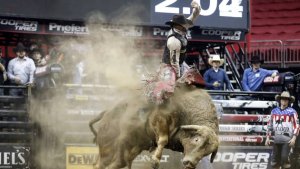 Lowe had every reason to believe he could crush the competition during the January 15, 2019, National Western Stock Show at the Denver Coliseum. He was competing in the PBR Chute Out, which tests how long a rider can remain upright and atop an out-of-control bull. Lowe was down to the last second of a bull rider’s crucial eight, riding atop the bull named Hard Times, when the bull bucked and he was thrown off.

After Lowe was thrown from the bull, a back leg of the bull came down on his chest. Lowe struggled to his feet and walked with apparent difficulty toward the exit before collapsing. He died later that day at Denver Health, after sustaining “massive heart, heart valve, and aorta damage,” (Tom Schad, USA Today, January 16, 2019).

Paul Andrews, president and CEO of the National Western Stock Show, commented about Lowe’s death, “He was fully protected with chest protectors and face protectors, but just one poor placement of a bull coming down on you in a certain area can do great damage and obviously that’s what happened in this instance.”

In a Medium article, we learn that, “One of the most dangerous injuries, though, doesn’t create a limp. ‘My dad taught me my whole life, you don’t quit until your head hits the ground,’ Matt Triplett said recently. Just like the NFL, bull riding has a concussion problem. When you fall off or get kicked or horned by the bull, your head stops moving, but your brain keeps moving and slaps the inside of your skull. ‘It’s like just shaking an egg,’ Justin Cornwell says. Because the injury is internal, it’s easy for a rider to ignore. A six-year study published in 2012 found head injuries to be the third most common injury in bull riding, after injuries to knees and shoulders.”

The PBR requires all riders to wear protective vests made of ballistic material. In 2013, the PBR mandated that riders born after October 15, 1994, are required to wear a helmet rather than a cowboy hat. However, it is up to the rider whether or not protective headgear is worn. Check out this study to see the effectiveness of the equipment. 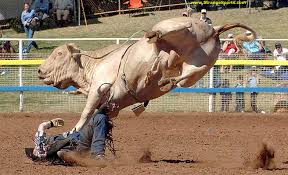 With PBR sponsoring more that 100 competitions that attract around 800 riders, these events have a huge following across the U.S., Canada, Brazil, and Australia. As Russia, Sweden, and Japan ramp up bull riding events, the sport is expanding internationally.

So, where are the regulations, the safeguards, the advocates for ratcheting up safety in bull riding? Is there an organization promoting protection and safety training for kids who idolize and want to emulate the bull riders? The argument seems to be that making bull riding safer would dilute the danger essential to the sport’s DNA.

A professor of kinesiology at the University of Calgary Sport Medicine Centre in Alberta, Canada, Dale Butterwick, is president of the Canadian Pro Rodeo Sport Medicine Team. Butterwick notes, “Occasionally I do my best at begging them to not compete.” The professor sums up the lay of the land by saying, “But the cowboy culture is certainly to ignore things.”

*A rank bull possesses a challenging characteristic—a kick, a speed, a bucking pattern—that presents beyond the normal bucking bull. Most cowboys will not ride a rank bull.