The door involved in the incident, at Hockley station (image courtesy of Tim Neobard). Note: the blue panel below the open door is not part of the train

On August 22, 2019, the 1:35 am Greater Anglia service from London Liverpool Street to Southend Victoria traveled 16 miles (26 km) at speeds of up to around 80 mph (128 km/h) with a coach door open. The RAIB (Rail Accident Investigation Branch) reports that, at the time, the coach was occupied by passengers. The train comprised three, four-coach-class 321 electric multiple units. The open door was on the right-hand side of the third vehicle of the leading unit (unit 321328).

There is no evidence of abnormal door behavior before the train stopped at Shenfield station, where doors on the right-hand side of the train were opened. When the train driver subsequently operated the door close control, the door involved did not close completely. The partly open door was not apparent from the position where platform staff visually check that doorways are clear of obstructions before a train departs. The door interlock system, designed to detect if any doors are not fully closed, detected that all doors were closed. As a result, the ‘doors open’ indication, given by a yellow hazard light on the coach side, had extinguished and the driver received a visual indication all doors were closed.

Because the door interlock system detected that all doors were closed, the train was able to move away when commanded by the driver

The train departed from Shenfield at around 06:58 hrs and, during the following 23 minutes, stopped at four stations with platforms on the left-hand side, including Hockley, where a passenger reported the open door to the driver and the train was taken out of service.

Class 321 electric multiple units were built by British Rail Engineering Ltd between 1988 and 1991. The unit involved was owned by Eversholt Rail and was one of thirty refurbished by Wabtec Rail Ltd in a program running from 2016 to 2019.

What caused the incident?

The passenger doorways of a class 321 unit comprise a double-leaf door which is opened and closed by a drive belt powered by a pneumatic piston. The connection between each door leaf and the belt includes a bracket fixed to the leaf by two screws and secured to the drive mechanism by a further two screws. 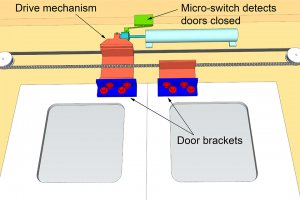 Schematic of door mechanism in the normal condition with doors closed (only relevant components shown, not to scale) 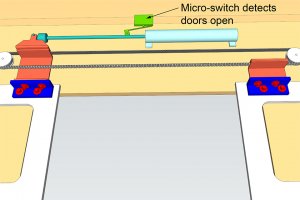 Schematic of door mechanism in the normal condition with doors open (only relevant components shown, not to scale) 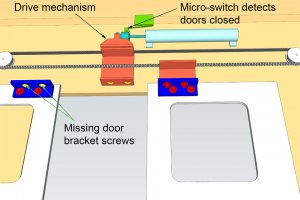 Schematic of door mechanism with one door leaf remaining open because it is detached from mechanism (only relevant components shown, not to scale)

The two screws and the associated four wedge lock washers were found by the driver, while at Hockley, when he opened a panel giving access to the door equipment. With the screws fallen from the bracket, the door leaf did not respond to movement of the drive belt and was free to open and close in response to the train’s motion.

The fastening arrangement was specified by Eversholt document (EV/VI 3216 Task OR3512) as two screws on each bracket flange with a pair of wedge lock washers fitted beneath each screw head, the aim being to avoid the screw working loose. A screw torque of 22 Newton meters (Nm) was given in an associated Eversholt technical procedure. The specification was dated February 2012 and replaced an earlier version which required a different method designed to prevent loosening of the screws at this location.

Wabtec required its staff to paint a yellow mark across the screw head, washer,  and bracket when they had tightened each screw to the specified torque. This assists maintenance staff to identify any subsequent loosening of the screw, as rotation results in misalignment of the marks.

Wabtec also required that a second person should witness the tightening, check 50% of the screws by applying 80% of the specified torque and then applying a blue dot to the screws which they had checked. 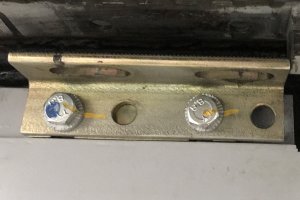 It underwent a routine maintenance examination on April 30, 2019, which included testing the door mechanism. No faults were noted on the door involved in the incident. A visual check for evidence of the unit’s door bracket screws becoming loose was undertaken on June 21, 2019, as part of surveillance monitoring carried out on several classes of Greater Anglia trains to improve door reliability. In response to reports of ‘binding’ in the incident doorway, adjustments were made to the leaf adjacent to that involved in the incident on June 25, 2019, and on July 5, 2019. The apparent omission of yellow marks during refurbishment meant that one of the visual indications of a loose screw was absent, reducing the likelihood of checks identifying any loosening of the incident screws. The lack of yellow marks on these screws was not reported nor addressed at that time.

The lessons learned from this incident involving class 321 units are likely to have wider applicability as RAIB has identified at least 13 classes of rolling stock currently operating on the British railway network in which doors are connected to drive belts in a manner similar to the class 321 units. A variety of fasteners and thread locking systems are being used when fixing brackets to the door and drive mechanism.

This incident demonstrates that the continued safe operation of train doors is reliant on g being a robust design and suitable inspection and maintenance processes. It highlights in particular the importance of:

A very similar incident, reported in NIR958, occurred with the same design of doors on a class 150 diesel multiple unit operated by Wales and West on August 1, 1998. As a result of this incident, the vehicle maintenance instruction for the doors was updated and the door bracket screw retention system on class 150 units used by some train operating companies was modified. The units operating in Wales currently use tab washers to prevent the screws from turning.

Read the RAIB report from GOV.UK.

TapRooT® has a team of investigators and instructors with years of extensive training ready to offer assistance worldwide. We also offer ongoing support to our clients through free newsletters and root cause tip videos, the root cause analysis blog, and our annual Global TapRooT® Summit.

Register for one of our TapRooT® courses. We offer a basic 2-day course and an advanced 5-day course. Contact us or call us at 865.539.2139 about having a course at your site or for further root cause analysis training opportunities. We’re here to find solutions for you. 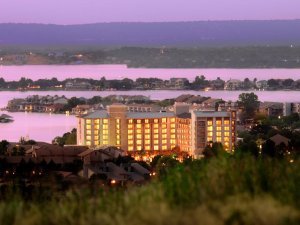 Don’t forget to register for the 2020 Global TapRooT® Summit

Register today for the 2020 Global TapRooT® Summit. Make your plans to hear and learn from well-known, incredible speakers and network with industry leaders.