During a smoke and fumes event on an Airbus A319-111 (G-EZNM) the pilots’ oxygen masks misted up shortly after donning.

The lenses of both pilots’ oxygen masks misted when put on during a smoke and fumes event, obscuring their vision. The commander removed his mask so he could see the flight instruments. The aircraft diverted to Birmingham and landed without further event.

The investigation found that the masks misted up due to a combination of the environment in which they were stowed and the condition of the lenses. The source of the smoke was probably an accumulation of dust in the transformer rectifier unit (TRU).

The aircraft manufacturer has added a cleaning procedure for the TRU in the Aircraft Maintenance Manual. The operator has added a practical demonstration on the use of the mask and its selectors during its recurrent training cycle.

History of the flight

The aircraft was on a scheduled flight from Newcastle International Airport to Bristol Airport. The copilot was PF for the sector and the commander was PM. About 30 minutes after takeoff, while in the cruise at FL290 and about 80 nm north‑north‑west of Bristol, the copilot noticed an acrid burning smell. Upon looking to the rear of the flight deck, both crew members observed smoke in front of the flight deck door and rising to shoulder height behind their seats. They donned their oxygen masks, and the commander took control of the aircraft and continued to communicate with ATC; the copilot actioned the “SMOKE/FUMES/AVNCS [avionics] SMOKE” checklist in the quick reference handbook (QRH). The commander transmitted MAYDAY to ATC, selected the emergency transponder code, and the crew started an emergency descent towards the final approach for Runway 27 at Bristol Airport.

About 90 seconds after the pilots donned them, their oxygen masks misted up, obscuring their vision. The copilot was able to read the checklist by holding it close to the mask, but could not read his flight instruments. The commander removed his oxygen mask so he could see the flight instruments, having first informed the copilot that he would do so and agreeing this was the least risk option. Upon removing his mask the commander noticed the smoke had dissipated. He then gave the senior cabin crew member a NITS1 briefing over the interphone, informing her of their intent to continue to Bristol. Upon looking at the aircraft’s navigation display, which was now visible, it was noted that Birmingham was a closer option. The pilots decided to divert to Birmingham, and informed ATC and the cabin crew of their revised plan.

During the descent, the crew made an announcement to passengers informing them of the situation. After this, the smoke became perceptible in the cockpit again. The commander then informed the copilot that he felt “a little bit wobbly” but well enough to continue. As his oxygen mask had cleared, he refitted it, and it did not mist up again. The aircraft subsequently landed at Birmingham and stopped on the runway, without further event and with the RFFS in attendance.

After a review of the situation, the commander removed his mask and discovered no perceptible smoke or fumes in the cockpit. The aircraft was then taxied onto a stand and shut down.

The commander believed the condensation formed on the lenses because they were stowed in a compartment that was relatively cold compared to the flight deck. After he removed the oxygen mask from his head, he placed it on his lap, when it probably warmed toward ambient temperature. He reported that his breathing rate was high when he first donned the mask, because of the stress of the situation.

The commander commented that he was proficient in operation of the mask, but while he was aware of the emergency pressure selector2 on the mask, his knowledge on the use of it was probably incomplete. He added that he could not be certain if he had selected it during the event. The copilot did not select the emergency setting.

Description: The mask type fitted to G-EZNM was a “MF10” full-face mask-regulator that provides protection during depressurization and smoke events, while allowing the pilots to communicate with each other. The window has two lenses with an air gap between them. The internal lens has an anti-fogging coating (Figure 1). 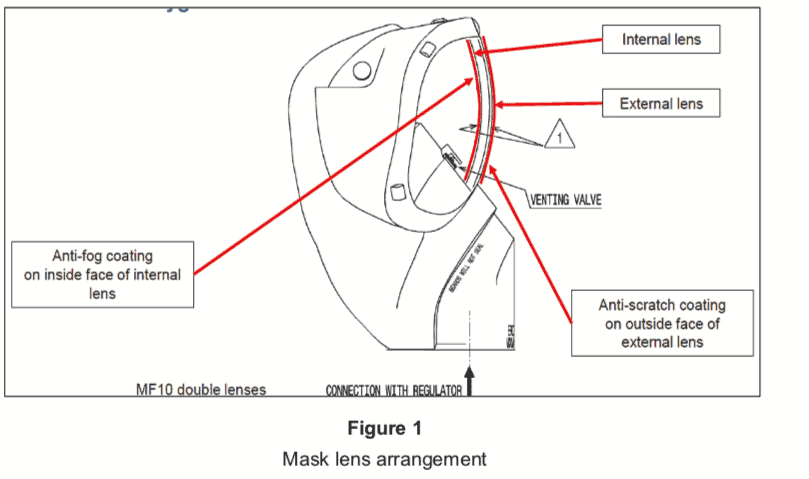 Pushing the n/100% (n – normal flow) selector into the 100% position, on the regulator control, supplies 100% oxygen (item 3 in Figure 2). After pushing the N/100% rocker into 100% position, rotating the emergency pressure selector in the direction of the arrow to the emergency position provides 100% oxygen with an overpressure (item 2 on Figure 2). The overpressure eliminates condensation or fogging of the mask, and prevents smoke, smell or ashes from entering the mask. 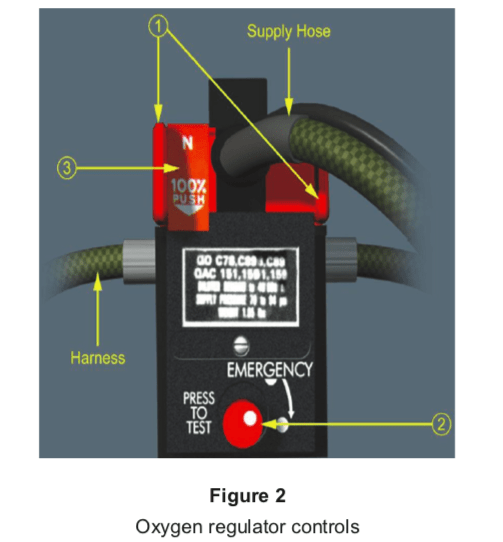 The QRH checklist for ‘SMOKE/FUMES/AVNCS SMOKE’ was as follows: 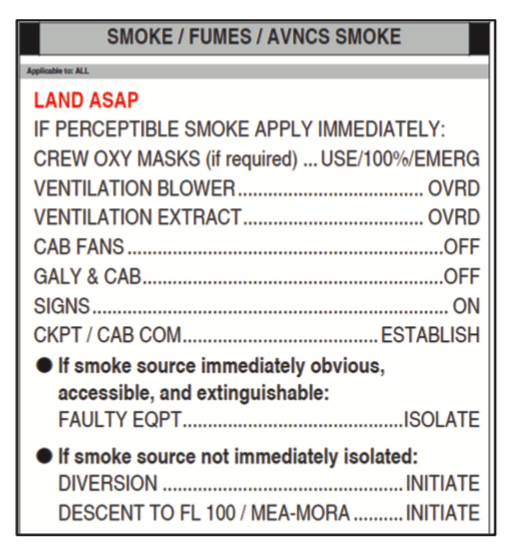 Additionally, the aircraft’s Flight Crew Operating Manual, which is a support document for crews, contained additional information. It stated, under the heading, “CREW OXY MASK.”

“Turn the emergency knob to remove condensation or smoke from the mask.”

The crew’s masks were examined by the manufacturer under AAIB supervision.

Both masks were in generally good condition. 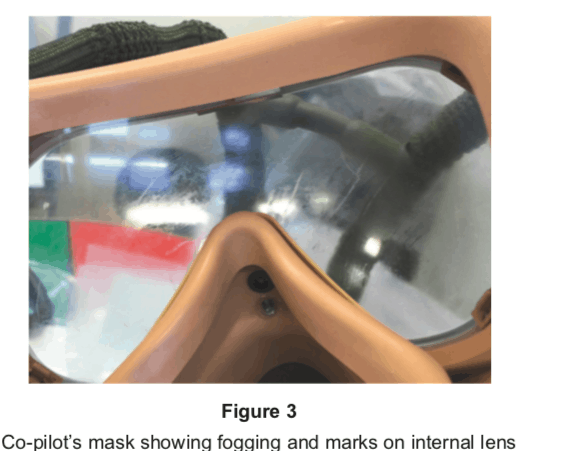 Both masks had 100% selected and the emergency pressure selector had not been rotated in the direction of the arrow; a state in which no overpressure was provided.

An exemplar mask was also tested. Its internal lens was not sensitive to fogging, and fogging disappeared instantly after exhaling on it.

NOTE: The above picture was taken prior to the pandemic and does not reflect COVID-19 practices that are part of current TapRooT® courses.