I’ve had many people explain to me that they understand that for serious incidents, they need robust root cause analysis (TapRooT® RCA) because … finding effective fixes is essential. But for simple incidents, they just can’t invest the same effort that they use for major investigations.

Here are the results that I’ve observed when people perform “too simple” investigations.

1. The first story the investigator hears is analyzed as a fact.

People doing simple investigations often take the first “story” they hear about a simple incident and start looking for “causes”. The shortcut – not verifying what you hear – means that simple investigations are sometimes based on fairy tales. The real facts are never discovered. The real root causes are unknown. And the corrective actions? They are just ideas based on a fantasy world.

The result? The real problems never get fixed. They are left in place to cause future incidents. If the problems have the potential to cause more serious accidents … you have a ticking time bomb.

This is somewhat similar to the first issue. However, in this case, the investigator fills in holes in the story they heard with assumptions. Why? Because the investigator doesn’t have time to collect too much info. Therefore, these assumptions become facts and become the basis for the root cause analysis and corrective actions.

The result? Just like the first issue, real problems never get fixed. The real, undiscovered problems are left in place to cause future incidents. If the problems have the potential to cause more serious accidents … you have a ticking time bomb #2.

3. Skip root cause analysis and go straight to the fixes.

When you don’t have time for the investigation, why not just skip straight to the fixes? After all … we already know what caused the incident … right?

This is a frequent conclusion when people THINK they already know the answers and don’t need to bother with a troublesome investigation and root cause analysis to fix a “simple” problem.

The problem is that without adequate investigation and root cause analysis … you don’t really know if you are addressing the real issues. Do you feel lucky? Well, do ya punk? (A little Clint Eastwood imitation – the famous meme is below.) 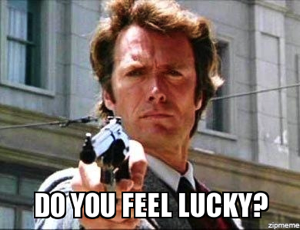 The result? You are depending on your luck. And the problem you may not solve may be more powerful than a .44 magnum … the most powerful handgun in the world.

4. The illusion of progress.

Management often thinks that even though they don’t give people time to do a good investigation, simple investigations are better than nothing … right?

Management is buying into the illusion of progress. They see some action. People scurry around. Fixes are being recommended and maybe even being implemented (more training). So things must be getting better … right?

As Alfred A. Montapert said:

“Do not confuse motion and progress.
A rocking horse keeps moving but does not make any progress.”

The result? If people aren’t finding the real root causes, you are mistaking the mistake of assuming that motion is progress. Progress isn’t happening and the motion is wasted effort. How much effort does your company have to waste? How much effort do you waste?

When people in the field see investigators make up facts and fixes, they know the real problems aren’t getting fixed. They see problems happening over and over again. They, too, may think they know the answers. Or they may not. But they are sure that nobody really cares about fixing the problems or management would do a better job of investigating them.

If management isn’t worried about the problems … why should I (the worker) be worried?

Assumptions, shortcuts, made-up fixes, and more become the standard practice for investigators. The things they learned in a root cause analysis class aren’t what they practice. What gets practiced (the bad practices) becomes the standard way that business is done.

Would you like to learn good practices for performing simple investigations? Here are two options:

1. Attend a TapRooT® 2-Day Root Cause Analysis Course. See the dates and location of upcoming public courses around the world (including virtual courses) here: