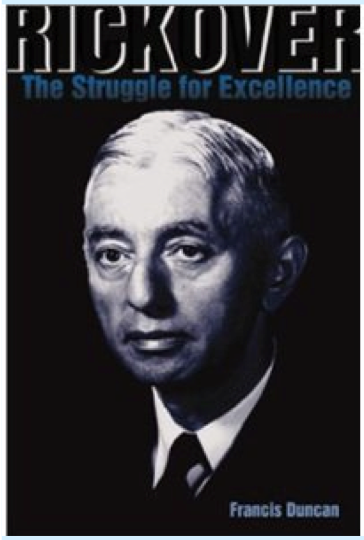 Rickover explained that there were a series of principles that helped the Nuclear Navy achieve excellence but the top three were:

Read about these three principles in a series of articles that I wrote:

Rickover lived out this quote:

He fought against the lax standards that the Navy practiced and implemented a system of excellence to run the Navy’s nuclear reactors.

You might think that he would be praised and lauded by the Navy for his success. Instead, he had to fight every inch of the way to steer a course true to his principles. And the oldest Admiral ever was fired by the youngest Secretary of the Navy ever. Sometimes that’s how Washington politics works.

Want to read more about Rickover’s life and how he developed his concepts of operational/process excellence? Read his semi-official biography (written by the official Nuclear Navy historian Francis Duncan) Rickover – The Struggle for Excellence. (Picture of the book at the top of the page.)