Heavy rain caused a landslip in Aberdeenshire, northeast Scotland—now under investigation as the cause of an early morning train derailment.

What caused the derailment of the 6:38 am ScotRail passenger train service traveling from Aberdeen to Glasgow Queen Street near Stonehaven, Scotland, on August 12, 2020, that was the cause of three fatalities?

The early investigation of the wreck suggests contributing factors were recent weather events and resulting effects the weather events had on the stability of the land under and around the rail network.

Specifically, severe thunderstorms and flash floods had occurred in many areas of Scotland just prior to the derailment of the train, creating a saturation and erosion of the soil and weakening the steep embankments flanking the tracks.

BBC tells us, “The passenger service, which was made up of two locomotives and four carriages, set off from Aberdeen at 06:38 and was heading for Glasgow Queen Street.

“It stopped at Stonehaven station on time at 06:54, but British Transport Police was told at 09:43 that the train had crashed.

“Investigators say the train had headed south from Stonehaven before being stopped by a signaler, who had received a report that a landslip [landslide] was blocking the line between Carmont and Laurencekirk.

“A decision was taken for the train to return to Aberdeen, but in order for it to turn around it had to be switched back onto the northbound track.

“The train had to reverse back to a set of points so it could be redirected.

“The train then continued its journey back towards Aberdeen, but had only travelled about 1.4 miles (2.2 km) when it hit another landslip at 09:40

“As the track curved to the right, the train continued in a straight line for about 90m (100 yards) until it hit the parapet of a bridge.

“The leading locomotive continued over the bridge and then fell down an embankment, followed by the third passenger carriage.

“The fourth passenger carriage remained upright and attached to the rear locomotive, also landing on the first carriage.

“The authorities were alerted to the incident minutes later – including by a member of the public who had seen billowing smoke.

“An off-duty conductor who was traveling on the train also walked about a mile to a signal box to raise the alarm.

“Network Rail and emergency services were dispatched to the scene, and the line was closed.

“As the points are manually operated, the train had to wait until an engineer could drive to the location and operate the points.

“Driver Brett McCullough, conductor Donald Dinnie and a passenger – Christopher Stuchbury – all died at the scene.

“All six of the other people on the train were taken to hospital, although four were subsequently discharged.” 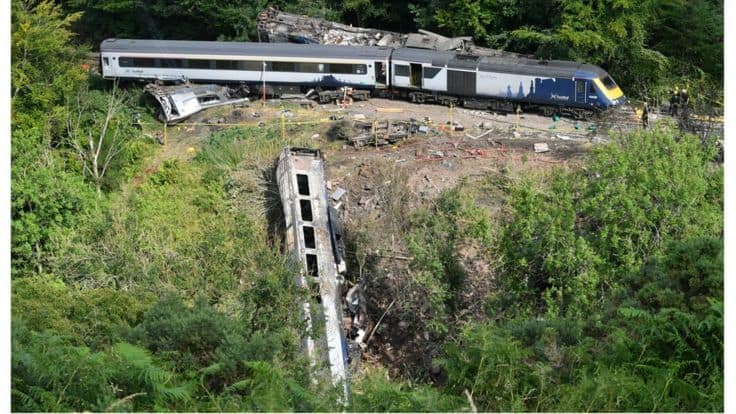 “Network Rail said it would carry out detailed inspections of high-risk trackside slopes with similar characteristics to the site of the Aberdeenshire crash,” according to BBC.

“Dozens of sites across Britain will be assessed using in-house engineers, specialist contractors and helicopter surveys.

“Scotland’s Lord Advocate has asked Police Scotland, British Transport Police and the Office of Rail and Road, the independent regulator, to conduct a joint investigation into the accident.

“It will be carried out under the direction of the Crown Office and Procurator Fiscal Service, and will run in parallel to the independent safety investigation being carried out by the Rail Accident Investigation Branch.”