What began as a seaplane tour over the Great Barrier Reef ended up as a wreck amid trees and brush.

A Cessna Caravan floatplane operating a scenic charter flight over the Great Barrier Reef clipped trees and impacted dense scrubland while attempting to go-around after an aborted water landing, according to details in a final ATSB (Australian Transport Safety Bureau) investigation report.

The pilot of an aircraft carrying 10 passengers was attempting a landing at Whitsunday Island’s Chance Bay on January 28, 2016, when it bounced three times on the water’s surface after the pilot reported holding off the landing in order to fly through an observed wind gust. 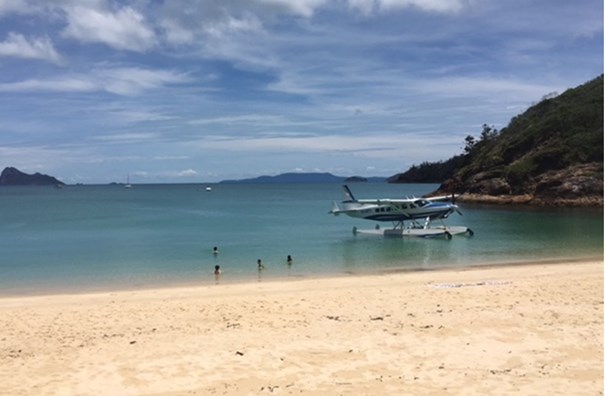 After the second bounce, with the aircraft nearing the beach . . .

The pilot increased engine power and initiated a go-around. A more pronounced third bounce, which occurred almost immediately after the second, resulted in the aircraft rebounding about 30 to 50 feet above the water.

While increasing power, the pilot perceived that the engine torque was indicating red, suggesting an engine over-torque for the selected propeller configuration. Noticing that the climb performance was less than expected with the flaps at the 30 degree setting, the pilot stopped increasing power and reduced the flap to 20 degrees.

As it climbed straight ahead towards a saddle, the aircraft’s climb performance was still below the pilot’s expectations. Assessing that the aircraft would not clear the surrounding rising terrain, the pilot turned right. However, during the turn the aircraft clipped trees before coming to rest in dense scrub about 150 meters from the eastern end of the main beach, near the top of a ridge.

What the ATSB investigation found

The ATSB found that the aircraft was flown beyond the aircraft landing area northern boundary before the first bounce off the water. This, combined with the delay in initiating a go-around, reduced the options and margins available for a safe outcome.

The engine operating limitations contained in the float operations pilot operating handbook supplement were also not consistent with other publications and may have influenced the power level applied by the pilot during the go‑around.

What’s been done as a result

The float manufacturer-published pilot operating handbook supplement was amended with respect to engine operating limits. The operator advised they have taken action to enhance or update existing procedures as well as checklists for their float plane operations.

Charter seaplane operations present unique challenges, particularly in relation to the water landing environment. Variable sea conditions and the possibility of sharing the landing area with marine vessels and people mean that every landing has the potential to be markedly different.

A go-around is a normal procedure and a safe option whenever landing conditions are not satisfactory. However, it is important to consider aircraft performance and local conditions when planning an escape route, including conducting “mental rehearsals” of standard procedures. In addition, making an early decision to conduct a go-around significantly reduces the associated risk.