What Can We Learn from the Fatal FIU Pedestrian Bridge Collapse? 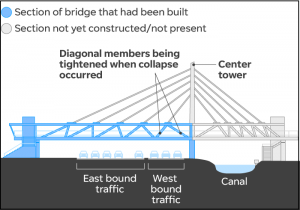 Original design of the bridge: National Transportation Safety Board

Hailed as a “construction marvel” and the “first-of-its-kind pedestrian bridge,” the 174-foot section of the pedestrian bridge at Florida International University (FIU) was being constructed to connect the university with the city of Sweetwater, allowing students safe passage in crossing above multiple lanes of traffic as well as a canal on their way to campus.

It was no secret that FIU considered the structure using Accelerated Bridge Construction (ABC) a feather in its cap. The bridge’s cable design was truss-supported and constructed of concrete—rather than steel, which is more common in such structures.

The NTSB Report: Errors upon Errors

In its final report, the National Transportation Safety Board (NTSB) identified 30 findings. Construction Dive reported that the NTSB’s “findings, foreshadowed by an earlier report from OSHA’s Office of Engineering Services, laid the majority of blame on the span’s design but also revealed major gaps in the project’s construction and safety protocols.” Here is the earlier 2019 report from OSHA.

CBS News reported that “two firms involved in the construction have been accused of safety violations in the past. Munilla Construction Management (MCM) — a federal military contractor for the U.S. Army and Navy — partnered with the FIGG Bridge Group to complete the bridge. FIGG has contracts with the Kennedy Space Center and NASA. FIGG was targeted by NTSB for many of its 30 findings.

Listen to this voicemail—from six days prior to the disaster—released by Florida DOT, revealing comments about cracks in the bridge left by an engineer on the FIU bridge job. 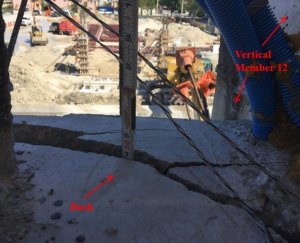 What Does the NTSB’s Final Report Tell Us?

Among the NTSB findings:

Read the final NTSB report. See the key participants in the construction of the FIU pedestrian bridge.

Founded in 1988, TapRooT® solves hurdles every investigator faces. TapRooT® root cause analysis takes an investigator beyond his or her knowledge to think outside the box. Backed with extensive research in human performance, incident investigation, and root cause analysis, TapRooT® is a global leader in improved investigation effectiveness and productivity, stopping finger-pointing and blame, improving equipment reliability, and fixing operating problems.

Register for a TapRooT® Root Cause Analysis Training Course

TapRooT® is global to meet your needs. Please see our full selection of courses.

Join Us at the 2020 Global TapRooT® Summit

The 2020 Global TapRooT® Summit, March 9-13, 2020, is the best setting to help you develop your roadmap to success. You will also meet industry leaders and network with other professionals.

Look through the 2020 Global TapRooT® Summit schedule to browse the tracks. We invite you to learn more about the Summit below: